Some stars who got their start on Disney try their hardest to hide it or put it on the backburner so that it doesn’t cloud other people’s judgement of them when they decide to evolve.

We’re sure there have been many instances that Demi Lovato has tried to do that, but the singer did something kind of cool this past weekend at one of her shows.

During the Los Angeles stop of her Demi Lovato: World Tour at the Staples Center, the singer brought a special guest onto the stage: Joe Jonas.

Yes, the guy she dated for all of five seconds joined Lovato on the stage to perform their duet “This is Me” from Disney Channel’s original movie, Camp Rock.

For those not familiar with the movie, which is hard to picture because it’s one of Disney Channel’s better original movies, it was arguably Lovato’s breakout role, playing the main character Michie who has to put up with Jonas’ egotistical Shane Gray for the summer.

Check out the video below and have a slight flashback to 2008, though it’s kind of hard to hear Jonas sing his part with all the screams from the girls.

Ever since the announcement was made that iconic 90s show, Boy Meets World would be getting a spin-off, fans of the show, new and old, have been anticipating its Summer debut.

Disney Channel, kindly, has already released a trailer for the upcoming series and even aired the pilot episode on their online streaming service. Today, the theme song for the show made its debut and it is different than the Boy Meets World theme most of us grew up with (remember the first season did not have an actual theme song?). The song, “Take on the World” was performed by series stars Rowan Blanchard (Riley) and Sabrina Carpenter (Maya).

Check out the song below and don’t forget, Girl Meets World debuts on June 27 at 9:45 p.m. after Disney Channel Original Movie, Zapped. 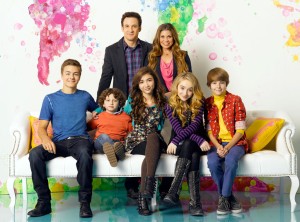 If you grew up in the 90s and were fortunate enough to witness ABC’s TGIF line-up then when you heard news that Boy Meets World would be getting a spin-off, you were wondering if the iconic show would be done justice.

The fact that Disney Channel would be the one to air the upcoming series and not ABC, was something that made hard-core fans against it with its recent history of crappy television programs.

Since the original announcement was made last year that Girl Meets World would in fact become a series, fans have started to change their opinion about the show with interviews, picture and all sort of media that have been released.The show, unlike the original, will focus on Cory and Topanga’s daughter, Riley and her life.

Today, the official first look at the show has been released which introduces us to Riley Matthews and the Shawn to her Cory, Maya. We also get the first look at Cory and Topanga exercising their parental duties for all of three seconds, but still it’s something we previously did not have.

Girl Meets World still does not have an official premiere date, but it’s already been confirmed that it will premiere this Summer, so keep an eye out.