Finally some good news for fans of Brand New who have had nothing but bad experiences with anything related to the band over the past month or so. Today, the band announced that they would be adding two more December dates to their already pre-existing west and east coast shows.

The two additional stops are  December 8 at The Troubadour in West Hollywood, CA, and December 22 at The Bell House in Brooklyn, NY.These new stops come after fan started an uproar about ticketing issues that scalpers and other third parties have caused. Attached to the new information is a lengthy statement from the band explaining how these two new dates are for those that are there to see the band; not sell the tickets to make a profit.

In the statement, they also explain that concert goers can bring in two non-perishable canned goods to be entered in raffle to win “an exclusive Brand New artifact”.

Check out the full message from “someone in Brand New” below:

In the spirit of humanity and togetherness, Brand New are adding a single show to each coast in December. We will be playing one at the Troubadour in West Hollywood on December 8th, and the other at The Bell House in Brooklyn on December 22nd. (Four & Twenty better get baking.)

These shows are smaller, and we are doing everything we can to make sure these tickets end up in the hands of the people who are actually going to jump around with the bands. We are not blind to the ticketing issues these shows have presented, and we are doing everything we can to learn how to best handle these kinds of problems. Because of the short amount of time running up to the scheduling of these dates, solutions are fewer, but we were able to reclaim a number of tickets from third party websites and will soon be releasing them to the public for their original price.
There’s gonna be a barricade front of house at the Troubadour. Don’t know if that’s relevant. I’m just trying to supply all the information here. Didn’t want those with stage crawling aspirations to be disappointed.

Lastly, we will be hosting food drives at all 6 shows this month! We will release the info for which charities will be collecting at each show soon, but for now we want to encourage EVERYONE to bring 2 cans of non perishable food items each, please. When you donate at the show you will receive a raffle ticket to win “an exclusive Brand New artifact”. I don’t know exactly what that means, but I’m sure it will be a signed drum head or poster or something cool like that, and the raffle will happen on site, probably while we are sucking on oxygen tanks in between album sets. Fun.

We hope your Black Friday was full of unbridled spending and pain. Gotta learn to suplex if you want those deals.

We will see you soon,
Someone in Brand New” 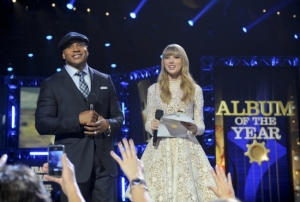 The Grammy’s have announced that they will be holding the Grammy’s Nomination Concert Live on December 6, where all the nominees for the yearly award show will be revealed.

Last year, the concert special had been held in Nashville, but this year, the association have chosen to go back home to Los Angeles for the revealing of the nominees. The hour-long CBS concert special will take place at the Nokia Theatre L.A. live on Friday, December 6 at 10 p.m. EST.

Kind of a bad timing for those that like to actually go out Friday nights, but we guess that’s why TiVo and DVR were created.

Not only will the nominees be announced, but like the titled states, there will be some artists hitting the stage during the broadcast. Now, who will actually be gracing the stage to perform and present is still unknown, but that information should be coming our way sometime soon, at least according to the press released issued by the academy earlier today.

Last year, the concert was held at the Bridgestone Arena in Nashville. The show was hosted by Taylor Swift and LL Cool J while performers for the evening included Maroon 5, Ne-Yo, fun. and Hunter Hayes.

As for the actual Grammy Awards, it will be broadcast live on CBS on January 26, 2013 from the Staples Center in Los Angeles starting at 8 p.m. EST.