With a little over a week left until the release of their fifth studio album, Emarosa has returned with yet another new song from it. On Monday (Jan. 28), the Kentucky-founded act unleashed their third single; a track titled “Cautious.”

The song, which premiered exclusively on Billboard, finds the band sticking to the poppy side of the rock genre; their goal with this new studio effort.

While speaking with the publication, lead vocalist Bradley Walden explained the lyrical inspiration behind the new song.

“Sex after heartbreak can tell you a lot about who you are,” begins Walden.

“If you move on, you move on. If you can’t move on, maybe that was love you had. When I wrote this I was just trying to navigate those feelings.”

Listen to “Cautious” above.

“Cautious” joins previously released tracks “Don’t Cry” and lead single “Givin’ Up” on Emarosa’s forthcoming studio album, Peach Club. Peach Club is due out Feb. 8 through Hopeless Records. Pre-orders for the album are still available on the band’s website.

Even though the album has yet to be released, Emarosa has been touring nonstop behind its imminent release. The European leg of their current tour will conclude tomorrow night (Jan. 29), at Tivoli Vredenburg in the Netherlands.

After wrapping up their European tour, the act will return to the North American touring circuit for a handful of Peach Club album release shows in early February. The album release shows will include gigs in Philadelphia, Dallas, Mesa, Los Angeles, and Honolulu. Once the album is out and in the hands of fans, the group will make their way to Japan in late February for four shows.

With their debut album set to be released in a couple of weeks, Knuckle Puck have return with the third single off of the impending album, a track titled “Pretense.”

Instead of premiering the song themselves, like they did with the first two singles, the Illinois group decided to get a little help from their friends from across the pond at RockSound.

“Pretense” will join previously released tracks “Disdain” and “True Contrite” on Copacetic. Copacetic is slated to hit stores on July 31 through Rise Records. Pre-orders for the record are currently ongoing on their website.

In support of the new album, Knuckle Puck is currently in the middle of the 2015 Vans Warped Tour. If you haven’t seen them, then you should, just keep an eye on their Instagram page because they like to post dummy-proof photos of where they’re merchandise tent is every stop. It’s kind of funny.

A week after announcing the release of their full-length debut, Knuckle Puck have now released the music video for one of the track off the record, “Disdain.”

While talking to Alternative Press guitarist Kevin Maida had nothing but good things to say about director Max Moore and how his attention to detail worked well for the band.

“Filming with Max Moore for ‘Disdain’ was truly incredible. His attention to detail and range of creativity worked very well with us. We could not be more excited to finally show people what the next chapter of our band will sound like with the new album.”

“Disdain” will be featured on Copacetic which is set to be released on July 31 through Rise Records. In support of the impending release, the Illinois band will be performing on the Vans Warped Tour this Summer.

Knuckle Puck announced last week they were putting their complete discography up for grabs at Bandcamp for free with the only catch being fans would need to download the music before today (June 11).

Turns out they had a good reason for giving fans that deadline of today; they had some big news to share.

The Illinois band have announced that they will officially be releasing their debut album this Summer.

The record will be titled Copacetic and is slated to hit stores on July 31 through Rise Records. Pre-orders for the record will begin will begin next Friday, June 19, the same day they will release a brand new song from the full-length.

For now, check out the cover art and track list for the impending released below.

Knuckle Puck will be hitting the road this Summer as one of the many bands on this year’s trek of the Vans Warped Tour. 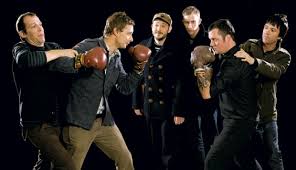 The song has not been officially released as a single, but the track is being performed for a live audience already.

The new song is titled, “Hall” and footage of the new song from a recent show in Tempe, AZ can be seen below.

“Halls” will join previously released tracks, “Canyon Moon,” “High Dive,” and lead single, “Cecilia and the Satellite” on McMahon’s upcoming debut. The debut will be self-titled and released through Vanguard Record on Oct. 14.

McMahon will be heading out on a Fall tour beginning on Oct. 14 in San Diego with Junior Prom and Hunter Hunted. Tour dates can be seen below.

ANDREW MCMAHON IN THE WILDERNESS FALL TOUR with JUNIOR PROM and HUNTER HUNTED:

If you follow one of the many bands that we do on Twitter, then yesterday (and today) you probably saw many of them congratulating Joel and Benji Madden on the release of their debut album as The Madden Brothers.

Over the past few months, the duo have been releasing tracks from the record, Greetings from California. Songs released to date included lead single, “We Are Done” as well as “Dear Jane,” “California Rain,” and most recently, “Out of My Mind.”

Greetings from California was officially released yesterday (Sept. 12) through Capitol Records, which would explain all the congratulations the brothers got from their band friends.

In honor of the release date, the former Good Charlotte dudes gave fans the chance to listen to the album in full, for free, on Spotify. You can head on over to the music streaming site now or just click the play button on the widget below.

Enjoy and let us know what you think about the direction they have gone in.

With Linkin Park’s new album on the cusp of being released, it comes as no surprise that the band have already debuted several tracks from the new album to their fans.

As of now, “Guilty All the Same,” “Wastelands,” “Rebellion,” “Final Masquerade” have already debuted, and today, the band released the music video for the newest addition to that list, the video for “Until It’s Gone.”
Unlike many artists, the band have decided to forgo premiering the video on YouTube and Vevo and decided to give it straight to the fans through their Facebook page.

As Mashable pointed out, this mode of releasing videos has been catching on with Ed Sheeran doing the same for his “Sing” video, Jay-Z with “Holy Grail,” Bruno Mars with “Gorilla” and Mariah Carey with her new track, “The Art of Letting Go.”

“The visuals have an aggressive edge to it that is the representation of the band as The Hunting Party,” Linkin Park’s Joe Hahn describe the music video to Mashable during an interview.

“We are the same guys you always knew but, a little older, weathered and experienced. The video has an undertone of the world is going to shit. There is black ooze that crystallizes the world. It is an infection. The black ooze is representing other music out there. We are merely here to fill in that sliver with the music that we bring. I guess you can say that we are filling a void.”

Watch the video below.

Don’t forget Linkin Park will be heading out on their “Carnivores Tour” with 30 Seconds to Mars and AFI in August while The Hunting Party hits stores next Tuesday (June 17). Hope we see you there.

After announcing plans to go solo, leaving behind the band that made him a household name, former My Chemical Romance frontman Gerard Way has revealed that he will be making his official, solo, on-stage debut and no it’s not on some small stage in the middle of nowhere.

It was revealed this morning through Twitter that Way would be making his first-ever live appearance as a solo artist at this year’s Reading and Leeds Music Festivals. The festivals, as always, will take place in late August simultaneously at both locations. Reading’s show will take place at the Richfield Avenue while Leeds will take place at Bramham Park.

Last month, Way announced his plan to go solo now that the other members of My Chemical Romance have done the same. Bassist Mikey Way went onto to form Electric Century, guitarist Frank Iero continued with his previous side projects and guitarist Ray Toro has been in the studio working on some secret project.

Reading and Leeds will take place during the weekend on August 22-24 and is expected to stream the event online like they do every year. Way joins an already packed line-up including Jimmy Eat World, A Day to Remember, Issues, Paramore, tour mates blink-182 and many more.

Tickets are currently on sale for the show, but with line-up like that, you might not want to take a chance on waiting for the last-minute.