Pharrell Williams, David Guetta, Los Unidades, and African musician WIZKID are some of the artists to be featured on the upcoming Global Citizen EP 1 album. On Tuesday (Nov. 27), international advocacy organization Global Citizen announced plans to release a four-song record at the end of the week. Due out this Friday (Nov. 30), the EP will be released in partnership with United States-founded Atlantic Records and United Kingdom-based Parlophone.

In conjunction with the surprise album announcement, the first single from the record was released. Titled “E-Lo,” the song is performed by Pharrell Williams, Jozzy, and Los Unidades aka Coldplay under a new moniker. Watch the Nelson Mandela-inspired lyric video for “E-Lo” above.

Pre-orders for Global Citizen EP 1 are currently available here. All pre-orders come with an instant download of “E-Lo.”

Proceeds from the forthcoming release will go directly to Global Citizen’s campaigns and advocacy efforts to end extreme poverty as well as assist in areas such as gender equality, education, water, and sanitation.

Global Citizen’s veer into the music world is not at all surprising since the project is headed by Coldplay’s Chris Martin who also curates Global Citizen’s annual live music festival.

“For hundreds of years, we have witnessed the power of music in bringing people together to drive activism and demand change,” said Global Citizen CEO Hugh Evans.

“We are thrilled to release Global Citizen EP 1 with new songs from these incredible artists who stand with us in the fight to defeat extreme poverty, and we are extremely grateful to Dave Holmes, Parlophone Records and Atlantic Records for their dedicated partnership and support as we demand to see an end to extreme poverty by 2030.”

Coldplay manager Dave Holmes adds: “It was a real honor to help further the Global Citizen movement by putting together this release alongside Chris and Parlophone. We’ve ended up with so many incredible performers, and we’re all extremely proud of the finished EP. May it be the first of many.” 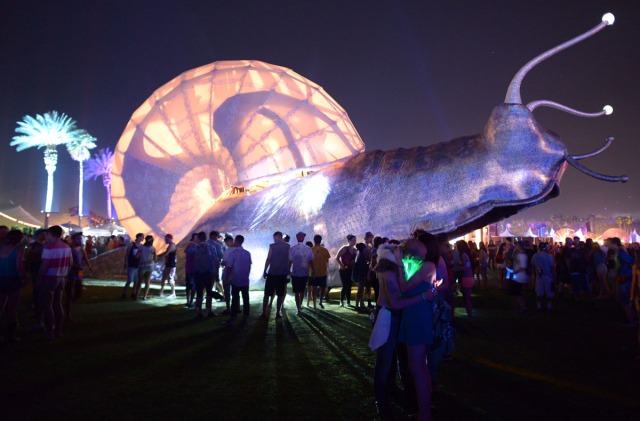 Following a few months of speculation and predictions, the line-up for this year’s Coachella has been revealed.

The festival organizers took to Twitter to break the new in which they wrote, “For those about to RT.” A photo was attached to the tweet which contained the full line-up of all the artists who will take the trip to California in April.

Performers for the two weekend-long festival will include: AC/DC, Jack White, Brand New, Bad Religion, Circa Survive, Interpol, Belle and Sebastian, Drake, Florence and the Machine, Kaskade, Ryan Adams, David Guetta, Fitz and the Tantrum, Marina and the Diamonds, LIGHTS, Andrew McMahon, and many, many more.

Check out the full, and pretty lengthy, list below.

Who are the highest paid DJs of 2013 you migth ask? Well, Forbes has done the leg work and have come up with a list of who are raking in the dough on their turntables or Mac computers.

The man behind one of Summer’s biggest hits, “I Need Your Love,” Calvin Harris has landed on the tip spot of the list. Part of his fortune was made courtesy of his two-year deal with Las Vegas’ club, Hakkasan while the other was thanks to songwriting and producing credits. In total, Harris has made a total of $46 million so far this year.

“The rise of dance music has been astronomical in the last three years,” he said while speaking with the publication about his success. “I happened to be in the right place at the right time.”

To this day, the 29-year-old DJ has released three albums of his own and has worked with the likes of  Rihanna, Ne-Yo and Florence Welch and several more. Harris dethroned last year’s number one, Tiesto, who’s intake actually rose from last year to this year; last year he made $22 million and this year he made $32 million.

Also making it on the list are the typical DJs that have been on the radio and in the public for sometime such as David Guetta, Swedish House Mafia and Deadmau5. All of them reportedly made over $20 million thanks to gigs all over the world.

The biggest shocker on the list goes to Pauly D which everyone knows as that guy from that annoying show on MTV. Forbes calculates that the former MTV reality star made about $13 million this year by touring with the Backstreet Boys and Jesse McCartney across the country this summer.

While the list includes 12 names, there are actually 13 on the list. Pauly D tied Diplo for last place.

Creamfields has been dubbed “the world’s leading dance music festival” by organizers and they are definitely sticking to that by scheduling some of the world’s biggest DJs to come and perform at the dance festival. The Prodigy, Tiesto, Avicii and David Guetta have all been confirmed to be performing at the three day music festival.

While these are just some of the names of the DJs on the list, there are many more such as Groove Armada, Richie Hawtin, Paul Oakenfold, Pete Tong, Afrojack, Ferry Corsten, Benny Benassi, Sasha, and Baauer who we all know as the mastermind producer behind the “Harlem Shake.”

Last year, there was an issue with flooding caused by a storm which led to acts such as Deadmau5, Tiesto and others not being able to perform. But this year, organizers say that they spent a lot of money to make sure that such a thing did not happen again so that everyone who attends don’t miss out because of a little rain.

Creamfields will be taking place in Daresbury Aug. 23–25.