It’s been a little over a month since New York-based music festival, the Governors Ball, unveiled their 2016 lineup. Now, fans who have been waiting patiently for the daily lineup to be unveiled have gotten their long-awaited wish granted. On Thursday (Feb. 11), festival organizers unveiled the daily lineup for the weekend long festival.

The Strokes, Beck, Robyn, Of Monster and Men, Matt and Kim, the newly revamped Bloc Party, and more will kick off the weekend-long festivities on Friday, June 3. The Killers, Against Me!, Miguel, HAIM, M83, and others will headline on Saturday, June 4. On Sunday, June 5, Kanye West, Death Cab for Cutie, CHVRCHES, Two Door Cinema Club, Cold War Kids, Eagles of Death Metal, and more will hit the stage closing out the 2016 edition of the yearly event.

In addition to the daily lineup, single-day passes are now available for purchase for the general public. For more information about the Governors Ball, head on over to the festival’s website. the complete list of daily lineup can be seen below. As a warning, just because the artists are listed in a specific order doesn’t necessarily mean that it how they will perform on said days.

The Governors Ball will once again return to its home turf of Randall’s Island for its sixth year during the weekend of June 3-5. 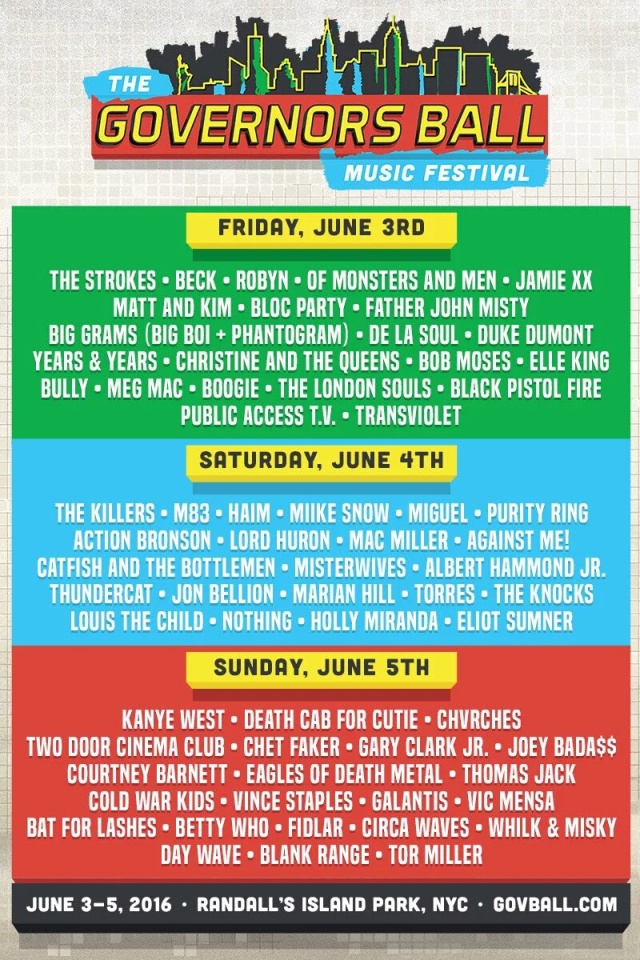