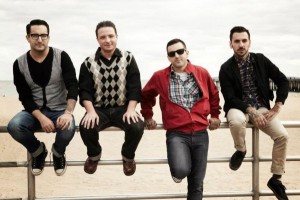 Bayside are ready to make 2014 their year and they have started just a few weeks short of the new year with news that they will be heading out on tour.

The band previously announced, after some cryptic pictures were posted on their Twitter account, that a new album which had been named Cults will be released on February 18, 2014.

In support of that new album, the band will be heading out on “The Great American Cult Tour” beginning in early March and will stretch all the way until early April; just four weeks, but a pretty good four weeks if your town happens to be on the schedule (our is!).

Also going along for the month-long “Cult” Tour are Four Year Strong, Daylight, and Mixtapes.

For now, check out the poster for the tour as well as the full tour schedule below. 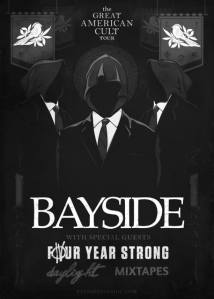 The Pixies might have lost Kim Deal a few months ago, but that hasn’t stopped them from going forward with their plans of new music and a new tour. Over the last few months, the band have been in the music news especially when Deal announced that she was leaving the band, but also when they announced that they were releasing a new EP, EP-1, the same day that it was scheduled to be released.

Today, the band have gone ahead and announced that they will be heading out on a tour in support of the new album and that they will make their trek around North American in the process. The tour which begins in early 2014, will begin in Toronto and go all the way until March 3 where it will end in Austin. The supporting acts for the two month tour will include Best Coast, Cults and Fidlar.

The full tour dates can be seen below.