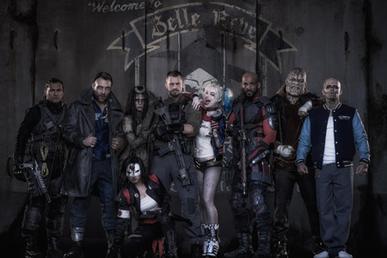 If you don’t know what a fandom is, then congratulations for not being part of the Tumblr generation who take the whole fan-mentality over and beyond. Where else would you see fan art with certain male characters continuously making out with each other or bad-ass costumes that made you wish you could sew?

Considering how powerful these “fandoms” people are, MTV has finally figured out how to get all those fans to flock to their 24-hour college network, MTVU for the first annual, MTVU Fandom Awards.

The categories for the newly composed award show ranges from “Fandom Feat of the Year” to “Ship of the Year.”

Fans and talent from the nominated shows and movies will be present when this award show goes down on July 27 at Petco Park during what else, Comic-Con, the prime hotspot for fandom members. Award voting starts today open MTVU’s website while the category of “Best Fandom Forever” will be exclusively held on Tumblr, pitting hardcore fans and their fandoms, against one  another.

But MTVU has managed to keep one category and the nominees for it underwraps; the category of “Fandom of the Year.” Reportedly, the category will include a bracket of 32 nominees and will dwindle down until only one remains. Sounds really exciting.

Check out the full categories below and start getting those fingers moving.

Breakout Fandom of the Year:

Ship of the Year:

Fandom Feat of the Year:

Community – the fandom kept the show on the air by petitioning for more episodes, while also getting back original writer Dan Harmon

OMG Moment of the Year:

This is the moment that all, if not most Hunger Games fans ave been waiting for; the new trailer for the upcoming sequel, Catching Fire.

The first trailer for The Hunger Games: Catching Fire was released a few months back during MTV’s Movie Awards and in a matter of minutes invaded the entire cyberworld. Now, thanks to Comic-Con, the actors and the crew, fans have been given the second official trailer for the film which is due out in November.

Watch the full trailer below and tell us what you think of all the new tributes and of course just the trailer in general? Are you ready to become the Mockingjay and start the revolution against the Capital, because I’m pretty sure we are!

The Hunger Games: Catching Fire will be released on November 22, just in time for the Thanksgiving holiday and remember, one spark can start a revolution.

“A princess, a pirate, a wizard, a queen, a knight and a savior will all join forces in search of Neverland” reads the tagline of the first trailer for season three of Once Upon A Time.

The cast of the hit ABC fantasy show, just finished their panel at Comic-Con and one of the revelations of the panel was that Ariel from The Little Mermaid will in fact be making her small screen debut this season.

According to the show’s creators Adam Horowitz and Edward Kitsis, the red-headed mermaid will appear in a scene where she steals a fork of one of the seven dwarfs. The audience was reminded that “anything could happen in Neverland” which leaves an open door for how the mermaid princess will come into the story.

Another surprise that was made also revolved around Neverland, but it had nothing to do with one of last season’s biggest question (who the heck is Peter Pan?) in fact it had to do with his sassy, fairy sidekick, Tinkerbell. She will be in season 3, but whether she will be the twinkle, Disney version or  a dark version, like Peter Pan, the men behind the show were sure to keep that underwraps.

But if that wasn’t enough, turns out that there will be a big death this season which the Evil Queen herself, Lana Parrilla says is her “favorite kill.” This, of course stunned the audience, but let’s be real, Regina is a great character and killing is right up her alley.

You can watch the trailer straight from Comic-Con, here and the sneak peek featuring Grumpy and Ariel (briefly).

After raising the $2 million to make the Veronica Mars movie, the cast and crew revealed yesterday during their Comic-Con panel, the three-minute trailer for the highly anticipated follow-up for the “gone too soon” pop culture television show.

At Comic-Con, thousands of fans slept ont he street in order to secure them a spot inside of the ballroom where creator, Rob Thomas and the cast which included Kristen Bell, Jason Dohring, Percy Daggs III, Francis Capra, Enrico Colantoni and more, answered questions about the movie as well as giving fans the official first trailer.

Instead of boring you with what the trailer is about, we will tell you just to fast forward to the three-minute mark for the movie footage or watch the whole thing which includes the cast and crew talking about the show and how Kickstarter helped the dream become a reality.

So what do you think fellow Marshmallows, are we ready?!

With Comic-Con slated to start today and us not being invited (okay, fine, not being able to get tickets) we do have the full schedule for the four-day (fine, five if you want) festivities. Each day, we will be posting up the schedule for the nerdy-goodness events that are to take place.

Today, we have the schedule for today’s activities which include the screenings of several different pilots that will make their debut later on this Fall. The screening doesn’t stop there because the people behind USA’s hit show Psych, will be premiere the highly anticipated musical episode. Grab some apology jerk chicken nachos, a pineapple and Gee Buttersnaps because it’s going to be good.

• Ghost Ghirls (Yahoo): Executive producer Jack Black is joined by cast members/co-creators Amanda Lund and Maria  Blasucci, Jeremy Konner and Erin McPherson, vp and head of video at Yahoo, for the panel, which will feature the world premiere of an original episode of the web series before it premieres. 1-2 p.m., Indigo Ballroom HIlton Bayfront.

• Holliston (FearNet): Creators and talent from the scripted horror comedy will take part in the panel and presentation. 8:30-9:30 p.m., Room 24 ABC.