It’s been several years since 104.3 The Shark invaded the air waves of South Florida and by the looks of how many artists have made their way down south, they are definitely staying true to their goal of bringing in the biggest rock musicians to one of the most forgotten parts of the country. After spending much of the week dropping hints on their social media accounts in the form of stitching art, South Florida’s only rock radio station announced their much-anticipated lineup for the 2018 incarnation of their annual Sharkwrecked at the Riptide Music Festival.

On Friday (Sept. 7), during their morning show “The Big Mistake,” hosts Ashley O. and Spanish unveiled the complete list of artists who will descend on South Florida during the first week of December for the festival. Day one will primarily feature artists who are currently finding homes on the rock and alternative radio charts.

Headlining the first day of the event will Panic! at the Disco, who earlier this summer unleashed not only their sixth studio Pray for the Wicked by also hit the touring circuit for a massive North American tour. Also taking the stage during the first night of the two-day event will be Sublime with Rome, Young the Giant, Blue October, Cold War Kids, lovelytheband, and Shipwrecked alums the Dirty Heads and Robert DeLong.

Pre-sale tickets for members of the station’s Chum Club will go on sale beginning next Wednesday, Sept. 12, at 10 a.m. local time and conclude on Thursday, Sept. 13, at 10 p.m. local time. After that, general ticket sales will begin.

Earlier in the month, the radio station revealed that the one-day event geared towards the younger rock fans had expanded to two days.

Sharkwrecked at the Riptide Music Festival will return to its home of Fort Lauderdale Beach in Fort Lauderdale, Florida during the weekend of Dec. 1-2.

The official poster for the event can be seen below. 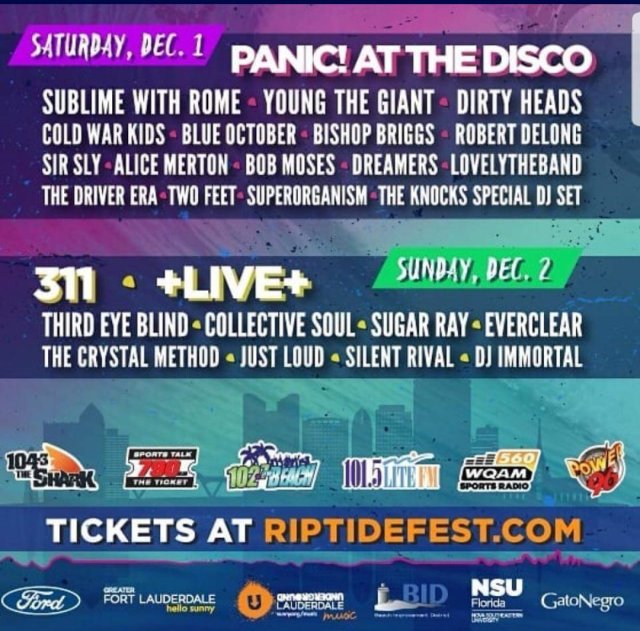 The sixth annual iHeartRadio Music Festival may be taking place this September, but the yearly event has just unveiled who well be hitting the stage at their daytime village. On Thursday (April 7), it was announced that acts like the recently reunited Good Charlotte, Panic! at the Disco, Cold War Kids, and Cage the Elephant will perform at the festival’s Daytime Village.

The Chainsmokers, Jeremih, Daya, and Lissie will join the four bands as well as previously announced artists, Sam Hunt and Alessia Cara. The iHeartRadio Music Festival’s Daytime Village event will return to the Las Vegas Village across from the Luxor Hotel and Casino on Sept. 24.

“In just three years, the Daytime Village has become the perfect complement to the historic iHeartRadio Music Festival,” said president of national programming group for iHeartMedia Tom Poleman. “Fans love the village vibe where they can check out their favorite artists in all different genres while partying on the strip with their favorite iHeartRadio personalities.”

This year, the iHeartRadio Music Festival will celebrate its sixth-year anniversary. While the Daytime Village performers have been announced, those waiting for the actual festival performers will have to wait a little longer. That lineup will reportedly be announced later this summer. The iHeartRadio Music Festival will take place on Friday, Sept. 23 and Saturday, Sept. 24.

It’s been a little over a month since New York-based music festival, the Governors Ball, unveiled their 2016 lineup. Now, fans who have been waiting patiently for the daily lineup to be unveiled have gotten their long-awaited wish granted. On Thursday (Feb. 11), festival organizers unveiled the daily lineup for the weekend long festival.

The Strokes, Beck, Robyn, Of Monster and Men, Matt and Kim, the newly revamped Bloc Party, and more will kick off the weekend-long festivities on Friday, June 3. The Killers, Against Me!, Miguel, HAIM, M83, and others will headline on Saturday, June 4. On Sunday, June 5, Kanye West, Death Cab for Cutie, CHVRCHES, Two Door Cinema Club, Cold War Kids, Eagles of Death Metal, and more will hit the stage closing out the 2016 edition of the yearly event.

In addition to the daily lineup, single-day passes are now available for purchase for the general public. For more information about the Governors Ball, head on over to the festival’s website. the complete list of daily lineup can be seen below. As a warning, just because the artists are listed in a specific order doesn’t necessarily mean that it how they will perform on said days.

The Governors Ball will once again return to its home turf of Randall’s Island for its sixth year during the weekend of June 3-5.

Whoever said that music and fashion go together was definitely onto something and the fact that it has taken this long to combine the two into a festival is a surprise.

A few months ago, it was revealed that a new festival that combined both music and fashion would be making its debut in Ohio later this year. At the time it was a pipe dream that was on the verge of becoming the real thing.

Now, with the reveal of the line-up of performers, this dream has quickly become a dream come true for the founders.

On the music side of the event, Circa Survive, Local Native, Parachute, Switchfoot, New Found Glory and many more have already been confirmed with the announcement that was made yesterday. On the fashion side of the event, designers such as , local designer Kelli Martin, who competed on “Project Runway” is set to appear on behalf of her brand, Alternative Fashion Mob.

The updated flyer with the performers can be seen below as well as the video which was released to announced the line-up.

Fashion Meets Music Festival (FMMF) is slated to take place from August 29-31 in Columbus, OH around the Arena District. Expo tickets start at $10 while the “Access to Excess” passes can run you $200. For more information about the festival, you can head on over to their website.

The Cold War Kids have released a music video for their song, “Lost That Easy.” The new song is featured on the band’s fourth album, Dear Miss Lonelyhearts which was released back in April.