You asked for an eclectic lineup, and Bonnaroo listened!

On Tuesday (Jan. 7), the masterminds behind one of the biggest music festivals in the United States announced the complete lineup for the 2020 incarnation of the weekend-long event.

Lizzo, Tool, and Tame Impala are just some of the acts that will take over Bonnaroo 2020 during the second weekend of June.

Fresh off a momentous 2019, Lizzo will be the first-ever female artist to top the bill at Bonnaroo. Not too shabby for the “Truth Hurts” crooner.

Unlike Lizzo, Tool’s appearance at Bonnaroo later this year will mark their return after a 13-year break. The iconic band, who released their long-awaited fifth studio album Fear Inoculum last August, last performed at Bonnaroo in 2007.

As for Tame Impala, the group has been steadily working their way up the echelon of Bonnaroo, starting at the secondary stage in 2016 and now set to perform on the main stage. How about that for a Cinderella story?

We did tell you the genres were all over the place.

Bonnaroo 2020 returns to its home of Great Stage Park in Manchester, Tennessee, during the weekend of June 11-14.

Tickets go on sale this Thursday, Jan. 9, at noon EST on the festival’s official website.

The full lineup for Bonnaroo 2020 can be seen below.

Phish, Childish Gambino, Post Malone, and the Lumineers are just a handful of artists who will make their way to Tennessee in mid-June for Bonnaroo 2019. On Tuesday (Jan. 8), festival organizers unveiled the musically diverse lineup for the 2019 incarnation of the annual music-centric event.

According to Bonnaroo’s website, the festival will host over 150 performers on over ten stages during the event.

This year will mark a special one for Phish as the band will play a total of three sets during the four-day festival. The band is scheduled to perform one set on Friday night (June 14) and two sets on Sunday (June 16). Phish made their Bonnaroo debut in 2009 where they shared the stage with Bruce Springsteen for three songs. They returned to the Bonnaroo stage in 2012 where they teamed up with Kenny Rogers for “The Gambler.”

The official lineup also boosts the return of the Grand Ole Opry with special guests. Those special guest will be revealed at a later date.

Tickets for the four-day music festival go on sale beginning this Thursday, Jan. 10, at noon ET. As like many other music festivals, Bonnaroo is offering a layaway plan for those who may be feeling the effects of the holiday season.

For more information about the music festival, tickets, or the lineup, head on over to Bonnaroo’s website here.

Bonnaroo 2019 will return to its home of Manchester, Tennessee during the weekend of June 13-16. The full lineup can be found below.

Eminem, The Killers, and Muse are just some of the artists who will make their way down to Tennessee in early June for the 2018 incarnation of the Bonnaroo Music and Arts Festival. On Tuesday (Jan. 9), festival organizers unleashed the lengthy lineup for the music festival’s seventeenth annual event.

For Eminem, Bonnaroo joins a long list of summertime music festivals the rapper will headline. As of now, the “Lose Yourself” musician will perform at California’s Coachella, Boston Calling, and New York’s Governors Ball. Like Eminem, The Killers will headline this year’s Boston Calling as well as Napa Valley’s BottleRock. As for Muse, the English band will also headline BottleRock alongside the Killers.

In addition to Eminem, the Killers, and Muse, acts like Future, Bassnectar, Paramore, Kaskade, Sturgill Simpson, Bon Iver, Khalid, Dua Lipa, Chromeo, Alt-J, Sheryl Crow, The Revivalist, Nile Rodgers & Chic, Manchester Orchestra, LANY, Sir Sly, and many more will appear at the four-day music festival. As revealed on the official flyer, Bon Iver will perform “two unique sets” during the event. Even though no additional information was given about that, fans should probably expect something cool from the Wisconsin-based band who have been quiet since the release of 2016’s 22, A Million.

Bonnaroo is set to take place during the weekend of June 7 – 10 at the Great Stage Park (aka the Farm) in Manchester, Tennessee. General ticket sale as well as VIP packages will go on sale beginning this Friday, Jan. 12, at 10 a.m. EST. For more information about Bonnaroo, head on over to the event’s website here.

If you weren’t aware, Bonnaroo took place over the weekend. Actually, it began on Thursday, June 11, and ended yesterday, June 14.

One of the many artists to take the stage at this year’s event in Manchester, TN was Twenty One Pilots.

For those in the Skeleton Clique who were not able to make it to Tennessee for the duo’s show or just weren’t near a computer when their live stream aired yesterday, the full performance is now available online.

Yes, over an hour of Twenty One Pilots performing songs from their albums including the recently released, and number one debuting album, Blurryface.

How about that for something to combat the Monday morning blues?

Check out the complete footage below.

Last night, Billboard and several other publications began to report that the large concert venture had purchased a controlling stake in the Tennessee-based music festival.

As of now, Live Nation owns stakes in over 60 music festivals including: Austin City Limits, Lollapalooza, Reading and Leeds, T in the Park, and many more.

According to reports, Superfly Production and AC Entertainment, who founded the festival, will continue to run the day-to-day operations for the festival which is set to take place in early June.

“We are strengthening our commitment to cater the best possible experience at Bonnaroo,” said Rick Farman, co-founder of Superfly.

“Through this partnership with Live Nation, we’re even more empowered to enhance the festival while preserving the integrity of the event that we’ve thoughtfully built over the past 14 years.”

“Partnering with Live Nation is a milestone for Bonnaroo. It opens up tremendous opportunities for us to continue to evolve the Bonnaroo experience in an exciting powerful way,” said Ashley Capps, founder AC Entertainment.

But the controlling stake in the festival isn’t the only thing Live Nation has acquired. The concert promoter has also purchased a share of the Bonnaroo property, Great Stage Park, also known as “The Farm.”

No telling what this means for the festival. Some say that it could be a good thing, like the founders claim, but it can also work against them especially if Live Nation decides to up the price of tickets which already costs attendees $350 for the weekend.

All that can be done is sit back and see.

This year’s line-up is set to take place from June 11-14 and will feature performances by Billy Joel, Kendrick Lamar, and Deadmau5

Mumford and Sons have been quiet for what seems like years (it’s only been about a year and a half), but now, it looks like the indie band will officially be making their return to the music world after their hiatus.

Last month, it was confirmed that they would be one of the major headliners at this year’s Reading and Leeds Festival in the United Kingdom while they were also confirmed to headline Bonnaroo this year, but festival gigs aren’t the only thing the band have up their sleeves.

Talks of a new album, their third was confirmed last Summer by Ben Lovett, but with the teaser the band dropped this morning, a new song might be making its debut pretty soon, like this upcoming Monday (March 2).

The band took to Twitter this morning to post a message to fans claiming that some news was coming on Monday. Attached to the message, was a link which to a short video.

The video begins with the band’s name on the screen while some instrumentals play in the background. It then shifts to the band in a room (studio?) and before the song can actually begin, the video snaps to black.

What a way to troll your fans, guys.

The Bonnaroo 2015 line-up reveal is currently underway and already a good chunk of the performers have been unveiled.

Many fans took to Twitter to reveal that not only did the 1-844-ROO-2015 number actually worked, but also that they were gifted certain performers names.

Check out the full line-up for the weekend-long festival due to take place June 11-14 in Manchester, TN. 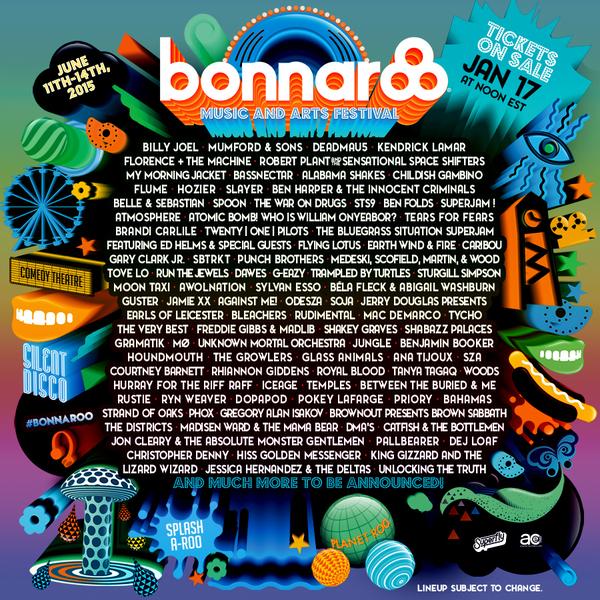 Tickets for Bonnaroo 2015 go on sale beginning this Saturday, Jan. 17 at Noon on the festival’s website.

With so many festivals announcing their line-up already, somehow you need to figure out how stay a little bit ahead of the pack and it looks like Bonnaroo has figured out just how to do that.

While Coachella and the Governors Ball announced their line-up through Twitter (or Facebook), something almost every festival does now, Bonnaroo have decided that the fans will be the ones to unveil the list for the annual event.

First, those wanting to be involved need to call a phone number (1-844-ROO-2015) to get an assigned artist. Then, those with an artist’s will need to take to all forms of social media to give the name of the artist assigned to them. they also will need to include, #Bonnaroo to the post.

While the three-hour digital scavenger hunt goes on, those glued to their phone, computer, tablet or whatever will also get the chance to watch a sneak peek for Skrillex’s documentary as well as some “Bonnaroo entertainment” over at the festival’s site.

Bonnaroo 2015 will be held on from June 11 to June 14 at its home of Great Stage Park in Manchester, TN.

As music lovers, we can all admit that one of our biggest goals is to attend as many music festival, concerts, and events as possible so we can get a taste for every type of a venue a musician gets the chance to play at.

Sadly, money rules and most of our dreams walk when you realize how much it would be to go to as many music events we would like to.

Money and obstacles is one thing that Marcus Haney laughs at. Haney has allegedly snuck into over 50 music festivals since 2010 including some biggies such as Bonnaroo, Coachella, Glastonbury and according to Haney, even the Grammys.

In his full-length documentary, No Cameras Allowed, he documents the last four years in which he traveled across the United States sneaking into the aforementioned festivals. He reveals how he plots to get in and reveals what he does to get into the festivals which include making replica wristbands and sneaking in by security guards like “he owns the place.”

In a recent interview, Haney explained the premise of the documentary, “The trailer makes the film out to be about a guy sneaking into festivals, but it’s really a coming of age story set in a music world.”

“It’s a love letter written to these festivals, in a way. And it shows them in such a great light that my goal is that people will see my film and then go and experience live music on their own. there’s no way you can translate the live music experience onto film.”

With that, we will agree. Check out the trailer to No Cameras Allowed.

How do you know that you’ve made a name for yourself as a musician in the music world? When over 70,000 people sing along with you, one of your hit songs and that’s exactly what happened last night during Jack White’s set at Bonnaroo when he went on to perform The White Stripes’ hit song, “Seven Nation Army” on his own.

To begin with, White performed a 26-song, two and a half hour set which surpassed the normally scheduled time slot by 45 minutes. The set included songs from his career including songs from The White Stripes, The Raconteurs, The Dead Weather and of course his solo catalog and a cover of Led Zeppelin’s “The Lemon Song.”

Check out the (short) video from last night, where the audience helped back White up for “Seven Nation Army.”