With a week until the 2015 Vans Warped Tour is slated to kick off their summer trek, organizers have revealed that the first day of the festivities are going to be broadcast live.

Those who might not be able to attend this year’s traveling rock show due to issues, will get the opportunity to watch 30 artists from this years line-up on four different stages from the comfort of their homes. The live broadcast will also feature backstage access as well as some behind-the-scenes footage.

The list of artists who will be performing during the live broadcast can be seen below.

In a less than one-minute clip, it reveals that Pierce the Veil, Real Friends, blessthefall, As It Is, August Burns Red, Chunk! No, Captain Chunk!, Mayday Parade, Follow My Lead, Get Scared, Tonight Alive, and Oceans Ate Alaska will all be releasing new records in 2015, though no specific dates for the record released have been confirmed.

Check out the clip below which features a new song from Oceans Ate Alaska titled “Floorboards” which will be released this upcoming Monday, Jan. 6. 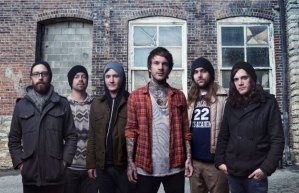 If you were one of the many fans who were looking forward to seeing Chiodos on their co-headlining tour with Blessthefall and support from I Killed the Prom Queen and Capture the Crown (also known as the “Crowd Surf America Tour”), then bad news is coming in your direction.

The band sadly had to announce that they will be dropping off the remaining tour stops due to a medical emergency on behalf of one of the guys.

In a letter to fans posted earlier in the day, the band revealed that guitarist Thomas Erak has had a recurring medical emergency that needed to be attended to immediately. due to the urgency of the medical emergency, the band figured it was in the best interest of all of them to just miss the last seven dates of the “Crowd Surf America Tour” than soldier on without Erak.

In the post, the band do say that they look forward to “seeing everyone on the upcoming Parks and Devastation Tour” which they will be heading out on with A Day to Remember, Bring Me the Horizon, and Motionless in White which is slated to begin on September 4 in Pittsburgh.

You can read the band’s statement below as well as the dates that they will be missing.

“Chiodos will be leaving the Crowd surf America Tour for the remaining dates from Rochester, NY through Columbia, MO.

We are sorry to our fans as well as the bands on the tour Bless the Fall, I Killed the Prom Queen and Capture the Crown. Our guitarist Thomas Erak has had a reoccurring medical emergency that needs immediate attention and we want to support him in his recovery.

We plan to make up these dates this year. We appreciate our fans continued support and look forward to seeing everyone on the upcoming Parks and Devastation tour with A Day To Remember, Bring Me The Horizon, and Motionless in White.”

Summer means Summer tours and now, Chiodos have announced plans to head out on tour with blessthefall and I Killed the Prom Queen.

The tour is slated to begin on July 25 in Oklahoma at the Diamond and hit up many other cities in the United States before wrapping up on September 20 in Kitchener, ON at the Koi Music Fest.

Check out full tour dates as well as the poster below.