With a little over a week left until the release of their fifth studio album, Mayday Parade are giving fans a chance to listen to another new song from the impending record. The new song is titled “Letting Go” and is the third single from Black Lines. The song made its official debut over at Rolling Stone, but can be heard here.

“‘Letting Go’ is a song about self-pity and not having the strength to get over a bad relationship,” explains guitarist Brooks Betts about the new song to the publication. “It’s about that weird spot when someone breaks you down even though you know they’re toxic. When you tried so hard for someone who was never going to let you in, knowing it’s going to end soon and preparing for the end.”

Listen to “Letting Go” below.

Last week, the Florida-based band revealed they will be releasing a documentary to celebrate their tenth anniversary a band. Fittingly titled Three Cheers for Ten Year, a direct reference to their song “Three Cheers for Five Years” from their Tales Told by Dead Friends EP, the documentary is set to be released on the same day as Black Lines; Oct. 9 through Fearless Records.

“Letting Go” will join previous singles “Keep In Mind, Transmogrification In a New Technology” and “One of Them Will Destroy the Other” on Black Lines. In support of the new record, Mayday Parade will be hitting the road this fall for the AP Tour. The tour which will also feature Real Friends, This Wild Life, and As It Is is set to begin on Oct. 14 at the House of Blues in Boston and wrap up on Nov. 25 at the House of Blues in Orlando. For the complete list of upcoming tour dates, click here.

A decade after forming, Mayday Parade will be celebrating the occasion by releasing a retrospective documentary. The film will be titled Three Cheers for Ten Years, a direct reference to their song, “Three Cheers for Five Years” off of their Tales Told by Dead Friends EP. The documentary will be released through Fearless Records on Oct. 9, the same day that their new record, Black Lines is set to be released.

“Three Cheers for Ten Years is important to us because it covers the history of the band and documents the beginning of this new chapter,” explained Sanders. “There’s a lot of passion in this documentary and we’re excited to share it with everyone.”

Check out the short snippet for Three Cheers for Ten Years below.

Earlier this month, Mayday Parade confirmed they would be releasing their fifth studio album, Black Lines, in the fall. Along with the announcement, the band released a video featuring a snippet of a new song titled, “Keep In Mind, Transmogrification In a New Technology.”

What the band did not tell fans, but we’re sure they figured it out on their own, was that the song would actually become the first single off of the Florida band’s new album. Listen to the new track below.

In addition to the new song, the band has also unveiled the complete track list for Black Lines.

The full itinerary for the month-long trek can be seen below. 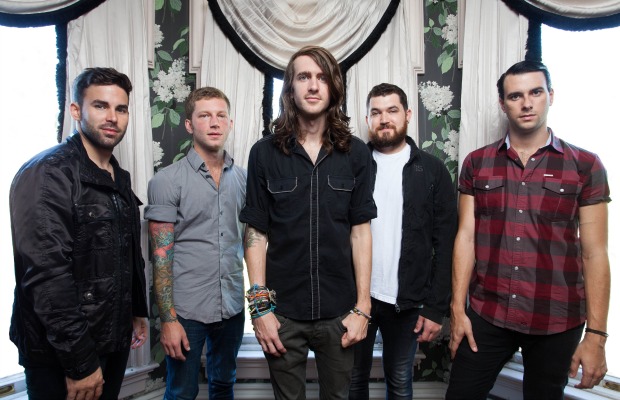 Last week Mayday Parade announced they would be releasing their fifth studio album, Black Lines, later this year. Now, several days after the announcement, the Florida band have revealed that they will be the headliners for this year’s’ Alternative Press Tour,’ aka ‘The AP Tour.’

This year’s installation of The AP Tour is the first in three years. The last trek was back in 2012 and was primarily focused on harder sounding bands like Miss May I and The Ghost Inside.

This year’s tour is also the second time Mayday Parade has been featured on the bill. The band first made an appearance on the line-up back in 2009 when they headed out alongside the likes of The Academy Is…, Set Your Goals, The Secret Handshake, and You Me at Six.

Mayday Parade’s impending new record is set to be released on Oct. 9 through Fearless Records while a snippet of the first single, “Keep In Mind, Transmogrification Is A New Technology,” can be heard here.