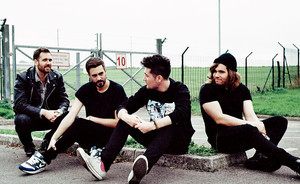 Bastille keep on releasing new songs from their upcoming mixtape, VS (Other People’s Heartaches Part III).

Their new track features sister group, HAIM on a track titled  “Bite Down.”

Check out the new track below.

Like many mixtapes, Bastille have revealed they will have a few special guests on the record aside form HAIM. Angel Haze, Lizzo, and MNEK have been confirmed to be on the soon to be released record.

When asked about his choice to make mixtapes, frontman Dan Smith said, “With the mixtapes, it’s about working with as many people as possible and having fun with people that we know and the friends we’ve made through touring.”

VS (Other People’s Heartaches Part III) is set to be released on Dec. 8. Previously, the band released the first song from the upcoming album, “Torn Apart” and its weird music video.