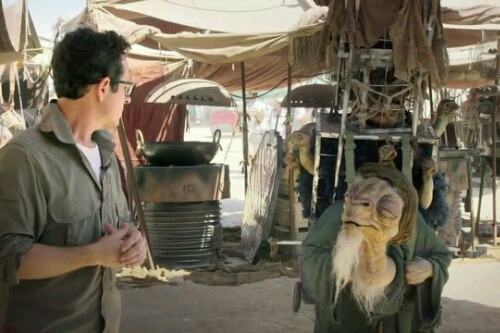 Are you a major Star Wars fan? Ever dreamed of one day having a small role in a film? Well, kiddies, you might be in luck because some good news is coming your way that people who answered yes to those questions would enjoy.

Beginning today (May 21), you can visit omaze.com/starwars to enter for your chance to win a spot in the film. Director J.J. Abrams invited fans, via special video message which was shot on the set of the upcoming film in Abu Dhabi, to this special opportunity.
The video announces the creation of Star Wars: Force for Change, an initiative from Disney, Lucasfilm and Abrams own company, Bad Robot to help find creative ways to help combat some of the world’s biggest problems.

“The Star Wars fans are some of the most passionate and committed folks around the globe,” Abrams said in the video message. “We’re thrilled to offer a chance to come behind the scenes as our VIP guest and be in Star Wars: Episode VII. We’re even more excited that by participating in this campaign star wars fans will be helping children around the world through our collaboration with UNICEF Innovation Labs and projects.”

If the VIP treatment isn’t enough to help you come up with something to submit, at least think of the children.

Check out Abrams’ full message below.