Everybody, it’s time to rock your body because the Backstreet Boys are going on tour! On Friday (Nov. 9), the Florida-founded boy band announced plans to embark on a massive tour in 2019. Titled the DNA world tour, the trek will find the group dancing their way across two continents throughout the new year.

The upcoming excursion will begin right after the five-piece wrap up their yearlong “Backstreet Boys: Larger Than Life” residency at the Zappos Theater at Planet Hollywood in April of 2019. The United Kingdom/European leg of the tour will begin on May 11 at the Altice Arena in Portugal. After being on the road for a month and a half, the trek will conclude on June 25 at the Budapest Arena in Hungary.

Following a short breather, the group will jump-start the North American leg in mid-July. The North American portion will commence on July 12 at the Capital One Arena in Washington D.C. After performing their way across venues in the United States and Canada, the tour will come to an end on Sept. 15 at the Prudential Center in Newark.

Watch the Backstreet Boys DNA world tour announcement above while the complete tour itinerary can be found below.

If a massive world tour was not enough to bring out all the Backstreet Boys fans, then a brand new album may have done the trick. In addition to the 70-date jaunt across the world, the act also announced plans to release a new album in January. Titled DNA (like the tour), the album is due out Jan. 25. DNA will be the follow-up to 2013’s In a World Like This.

In conjunction with the new album news, the band also debuted the record’s lead single; a track titled “Chances.” The new tune was co-written by One Republic’s Ryan Tedder and pop star Shawn Mendes. Listen to “Chances” here.

Tickets for the Backstreet Boys’ upcoming tour will go on sale beginning Wednesday, Nov. 14. All tour tickets purchased will receive a physical copy of the group’s new album upon its January release. 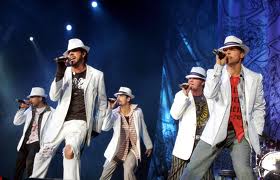 The Backstreet Boys and he Spice Girls heading out on tour together? That’s like a 90s kids’ dream come true and chance of that happening look to be getting better.

Yesterday afternoon, rumors started that both iconic groups are in the process of planning a tour thanks to an interview for the U.K. paper, The Sun with Backstreet Boy Brian Littrell.

“We are actually in early talks about maybe doing a world tour together with the Spice Girls,” he was quoted as saying, but also told fans not to put too much hope into it because there’s always that chance that the tour will be a bust.

Remember Posh Spice herself, Victoria Beckham has repeatedly said that she is not interested in a reunion; their performance at the Summer Olympics in 2012 was the one shot deal. In an interview with Vogue Paris, she revealed that she knew it was over for her during their reunion tour in 2008, “It should have been the best moment of my life, but I just wanted to be elsewhere. It wasn’t a lack of respect for the girls or the audience, but the passion just wasn’t there.”

Though Posh might not be down for a reunion, Scary Spice Mel B. said that she would be fine with a reunion especially since 2014 will mark the group’s 20th anniversary.

“It will be our 20th year anniversary next year so I’m hoping we do get together and do something,” Mel B told MTV News. “It kind of would be a shame if we didn’t.”

But even if the reunion doesn’t happen, the Backstreet Boy already having a full year ahead of them. Their Backstreet Boy Cruise is set to sail this coming October, while their “A World Like This” Tour with Avril Lavigne, will begin this May in Moncton, New Brunswick.

If you would have told us thirteen years ago that the Backstreet Boys and Avril Lavigne would be going out on tour together, chances are, we would have laughed in your face and said “keep dreaming.” Well, we can tell that things have changed in that time frame because it was just announced that the iconic boy band and the skater girl will in fact be heading out on a tour together.

Today, it was announced through Twitter that the two music staples will be heading out on a two-month North American tour titled the “In A World Like This” Summer Tour, beginning on May 3 in Moncton, New Brunswick at the Moncton Coliseum. The show will then hit the road, wrapping up on June 22 in Wantagh, NY at the Nikon at Jones Beach Theater.

Fan club tickets and VIP packages will go on sale next Monday, Mar. 17 at 10:00 a.m. local time. VIP Packages will reportedly include a meet and greet, soundcheck party and more. For more information, you can head on over to the Backstreet Boys’ website where the full announcement was made. 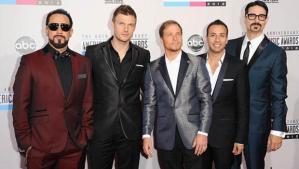 This is about the time when we start all the “Backstreet’s back…all right!” jokes, because it’s not a joke, the boys are really back with a brand new album and even Kevin is back in the group! Let the 90s rejoice in excitement.

For the past couple of years, there has been a resurgence of boy band with groups like One Direction, The Wanted and others making their way onto radio stations around the world.

Just earlier this year, New Kids on the Block, 98 Degrees and Boyz II Men set out on a North American tour, letting fans from the yesteryear (okay find the 90s), know that they were coming back in full swing even if they were “boy” bands anymore. Now, we can add another boy band to the list making their way back to the music charts, Backstreet Boys.

In honor of the 20th anniversary of the band, they have decided to release a new album titled, In A World Like This, through BMG on July 30. For those that don’t remember, the group were previously signed to Jive Records which was also home to Britney Spears, ‘N Sync, Aalyiah and many more.

The title track is currently out and features missing Backstreet Boy, Kevin Richardson, who left the group back in 2006.

The album was recorded in both London and Los Angeles while most of the songs were co-written by Max Martin, who happened to have written most of the songs that helped launch the five men into stardom, and produced by Martin Terefe.

As if that wasn’t good enough news, BMG also announced that they have signed a publishing deal for all territories outside of Japan.

“Backstreet Boys‘ new deal with BMG represents the ‘Best of Both Worlds’ … BSB gets to own their album while at the same time they have a real team behind the marketing and promotion of their music,” said BSB’s management team at Prospect Park. “It’s a win-win for both teams.”

“Having worked with the Backstreet Boys over 20 years ago, it is of great personal satisfaction to be working with them again. Their careers are quite remarkable and it is probably safe to say that they have claimed their place in history as the greatest male pop group of all time. Moreover, these guys remain just as ambitious and passionate as the day they started and we are so proud that they have put their trust in BMG,” added Richard Blackstone, EVP creative & business development at BMG.

But wait, there’s more (sound just like those TV game shows, right?); the group have also announced that they will be heading out on a tour starting August 2 to coincide with the release of the new album.

Watch the music video for “In A World Like This” below:

The Backstreet Boys weren’t kidding when they said, “Backstreet’s back!” The 90’s boy band have revealed that they will be the subject of a new film by Stephen Kijak (Stones in Exile). Like most documentaries, the film will concentrate on the band’s rise to super-stardom and continue throughout their career, not leaving a single stone unturned.

“We always wanted to make a film and now is the ideal time – with Kevin back, the fact that we are masters of our own destiny, a new album in the works and our 20th anniversary all adds up to being the right time to share our story,” the band said in a statement.

Looks like a lot of teen girls who grew up in the 90’s will be checking out this film which should be completed sometime in the Fall. In the mean time, the band will be concentrating on their upcoming 20th anniversary world tour as well as new album.