Days after announcing the release of a brand new music video, Thirty Seconds to Mars have kept their word. On Tuesday (June 12), the California-founded band unleashed the music video for their latest single, “Rescue Me.” Instead of being over-the-top dramatic, like their past videos, the clip has a simple premise; a group of diverse people, including the Leto brothers, showing their vulnerable and emotional sides.

In an email sent to fans accompanying the three-and-a-half-minute clip, frontman Jared Leto reveals the inspiration behind the song. As it turns out, the track is about pain, empowerment, but above all, freedom.

“It’s also a song about the brutal war so many of us wage against fear, depression and anxiety in the hope that we might, one day, live a life filled with happiness and dreams. Pain does not discriminate. It can affect us all. In our bodies. Our hearts. Our minds. And often, when that pain is emotional or mental, we are afraid to speak up.”

Leto concluded the letter by thanking all the people involved in the video for being brave, selfless, and vulnerable by letting their true emotions show. Accompanying the letter, Leto included several links to organizations for those who need help including links to the Treatment Advocacy Center, Change Direction, Crisis Text Line, Suicide Prevention Lifeline, and the World Federation for Mental Health.

The impactful and emotional music video was directed by filmmaker-director Mark Romanek. Romanek’s role as director marks the first time in 13 years that Leto was not behind the camera directing the band’s music video.

“It was a gift to have him carry the weight so graciously and deliver something so profoundly simple and beautiful,” Leto said about the director.

Watch the music video for “Rescue Me” above.

The new music video comes hours after it was confirmed that longtime guitarist Tomo Miličević had left the band. On social media, the former member addressed his departure telling fans that “it is the best thing for me in my life and also for the band.” Miličević joined Thirty Seconds to Mars in 2003.

Last week, the remaining members of the group began their trek across North America on their “Monolith” summer tour. The complete list of upcoming tour dates can be found here.

When Thirty Seconds to Mars began their press cycle in support of their fifth studio album, America, fans began to notice that longtime guitarist Tomo Miličević was missing from all the meetings. In March, frontman Jared Leto advised fans that Miličević was taking some time off to deal with a “personal matter,” though fans were left wondering what exactly the personal matter was. On Tuesday (June 12), Miličević formally announced his departure from the California-founded band.

Taking to social media, the guitarist posted a letter to fans addressing his decision to leave the band he had been a part of since 2003.

“I don’t really know how to explain in a note how I could have come to a decision like this, but please believe me when I say that this is the best thing for me in my life and also for the band,” wrote Miličević.

In his letter, he continues to thank the fans for letting him live his dreams on stage every day for the past 15 years and thanks the Leto brothers (Jared and Shannon) for letting him be a small part of their massive dream.

“Most of all, I want to say thank you to Jared and Shannon for allowing me the privilege to be a small part of their dream and to have been able to share the stage with them for so long.”

For fans who are angry or sad about his decision to leave the band, Miličević had one final thought for them: “Please don’t be sad or angry over this and most of all, please don’t be divided over this. This is a good thing and will be good for everyone.”

Now that Miličević is longer in the band, there is no word on whether the band has found a replacement, though it looks like it won’t affect their summer tour.

Last week, Thirty Seconds to Mars officially kicked off their North American “Monolith” tour. Tonight, the band will perform at the DTE Energy Music Theater in Detroit with Walk the Moon, MisterWives, and Joywave. The complete list of upcoming “Monolith” tour dates can be found here.

Whether you love them, hate them, or are eternally indifferent to them, one thing you can praise Thirty Seconds to Mars for is their unrelenting passion and dedication for promoting themselves and their music. On Monday (April 2), the California-founded band, more specifically frontman Jared Leto, took to social media to announce a surprise meet up at Madison Square Garden in New York. Shortly after the original post, he gave specific instructions as to where fans, and curious bystanders, should enter to arrive at an undisclosed location for a massive surprise.

As it turns out, this was just stop one on the group’s week-long trek across America in support of their upcoming fifth studio album. In a short video posted on Twitter, Leto confirmed his plans to travel across the country any way possible whether it be on a bike, by hitchhiking a ride, or even taking a hot air balloon just to showcase the subject behind the new record; America. The week-long trek will wrap up in the band’s hometown of Los Angeles on Friday, April 6, just in time for the album’s release.

“It’s a pretty big adventure. The album is called America and it comes out April 6 and to celebrate, I’m going to hitchhike, among other things, across the country from New York City to Los Angeles,” Leto explained to Ryan Seacrest during his morning radio show. “I may jump on a donkey in the Grand Canyon or take a hot air balloon.”

During the excursion, Leto will also hand out genetic testing kits from 23andMe to encourage fans to discover more about their heritage.

America is the follow-up to Thirty Seconds to Mars’ 2013 release, LOVE LUST FAITH + DREAMS. The band has already released four new tracks from the impending release including “Dangerous Night,” “One Track Mind,” “Rescue Me,” and lead single “Walk on Water.”

A day after confirming the title of their upcoming new album, Thirty Seconds to Mars has unveiled yet another new song from the impending release. On Friday (March 23), the California-founded band unleashed their third single; a track titled “One Track Mind.” The electronic-sounding tune features guest vocals by A$AP Rocky about halfway through the song. Listen to “One Track Mind” above.

“One Track Mind” will join previously released singles “Dangerous Night” and “Walk on Water” on the band’s upcoming fifth studio album, America. Back in February, the band formally announced that America (which at the time was being referred to as The New Album) would see a release date of April 6 through the group’s new label of Interscope Records. During an interview on The Ellen DeGeneres Show, Thirty Seconds to Mars frontman Jared Leto led fans to believe that the record would simply be titled The New Album. Around the same time, speculation on social media was claiming the album would instead be titled America. Flash forward a month and those speculations were confirmed as true.

In addition to A$AP Rocky, the 12-track record will also feature guest appearances by Halsey (“Love is Madness”) and super-producer Zedd, who produced “Dangerous Night.” America is the follow-up to Thirty Seconds to Mars’ 2013 release, LOVE LUST FAITH + DREAMS.

In support of America’s release, the trio announced last month that they will embark on a massive summer tour. The “Monolith” tour will kick off on June 6 at the Budweiser Stage in Toronto, Ontario and conclude a month and a half later on July 22 at the Ak-Chin Pavilion in Phoenix, Arizona. As per the band’s recently unveiled track listing, the tour is named after one of their new tracks.

Hitting the road alongside Thirty Seconds to Mars for the excursion will be Walk the Moon, MisterWives, Joywave, K. Flay, and Welshly Arms. Tickets for the upcoming tour are currently available here while the complete list of your dates can be found here.

Ever wondered what kind of genre of music is the most popular in your home state? Thanks to Movoto, they have released an interactive map that lets you see what kind of music genre each individual state prefers the most. Below, we have acquired maps that give the general look at the preferred genres throughout the country.

These maps follow similar ones that were posted a few months ago by music tech company, the Echo’s Nest which gave us categories such as “Distinctive Artist by State” and “Most Ignored.” Unlike those maps that were composed, the Movoto maps used data collected from the National Endowment Of The Arts, the Bureau Of Labor And Statistics and the U.S. Bureau Of Economic Analysis. On Movoto’s site, you click the play button on the top and then go ahead and click whatever genre you prefer and watch the results light up.

Check out the maps and see if your state fall within your favorite genre of music. Spoiler, our isn’t there. 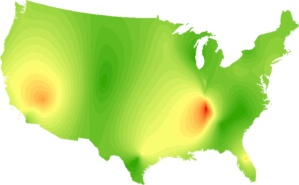 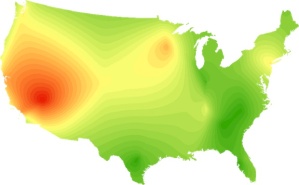 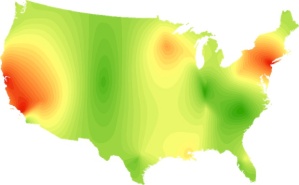 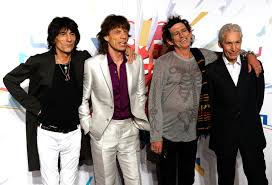 Last year, The Rolling Stones had done a few selected concert in London and New York as part of their “50 and Counting” mini tour. When they had been asked in an interview if there would be a full-fledged tour, Mick Jagger slyly said, “there have been quite a few offers” and continued to see what are the odds of such a thing happening.

Then Keith Richards discreetly hinted that all the fans of the classic rock band would have to just sit and wait for an official announcement to be made. For most, this come off as a “definitely” to the big question of whether or not a full “50 and Counting” tour would be on its way.

Now, according to Rolling Stone magazine, an inside source in the concert business has just revealed that yes, there will be an 18 day, North American tour for the band. Billboard originally said that the band will play ‘fewer than 20’ dates, but now Rolling Stone’s source is saying that it will be 18 dates.

This will be the band’s first tour since the 2005-2007 “A Bigger Bang” tour and said that if the past has shown any indications, this tour will be “a lot more adventurous.” While these dates are for the United States, the UK will be getting some of the Rolling Stones love too. According to British band, Kasabian, The Rolling Stones will be playing Glastonbury.