Last week, Alternative Press confirmed the first wave of artists set to hit the stage during the 2017 Alternative Press Music Awards set to take place this summer. On Tuesday (April 25), the rock-centric publication unveiled the list of categories and nominees for the summertime music awards show. In addition to the typical categories such as “Artist of the Year,” “Song of the Year,” and “Best Music Video,” the fourth incarnation of the annual awards show added two new categories to the list; “Best Hard Rock Artist” and “Best New Artist.”

“This year’s nominations are from a very diverse pool of artists, probably the most diverse we’ve ever had,” said Alternative Press founder and CEO Mike Shea. “We are representing genres from alternative to indie pop to hard rock to metal – all of whose nominations showcase the best in their field as chosen by a pool of input from fans, music industry VIPs, and the staff at Alternative Press.”

Fans can currently go to Alternative Press’ website and vote for their favorite artists in all the categories. Voting is officially underway with the polls closing on Friday, June 30.  Tickets for the awards show are also available on the publication’s website.

In addition to adding new categories and featuring a more diverse list of performers, this year will also mark the first time in two years that the awards show has changed hosts. Earlier this year, the publication released a short clip featuring previous 2015 and 2016 hosts Alex Gaskarth and Jack Barakat from All Time Low, handing over the APMAs hosting mantle over to Black Veil Brides/Andy Black leader, Andy Biersack.

The 2017 Alternative Press Music Awards is set to take place on July 17 at the Quicken Loans Arena in the publication’s hometown of Cleveland, Ohio. Previously announced acts including All Time Low, New Years Day, Sleeping with Sirens, Pierce the Veil, The Pretty Reckless, Bone Thugs (the extension of Bone Thugs N Harmony), Andrew McMahon in the Wilderness, Against Me!, Machine Gun Kelly, and Korn were confirmed to hit the stage during this year’s festivities.

For now, the complete list of nominees can be seen below.

Artist of the Year
A Day to Remember
Blink-182
Fall Out Boy
Good Charlotte
Green Day
Machine Gun Kelly
Panic! at the Disco
Pierce the Veil
Sum 41
The Pretty Reckless

Song of the Year
A Day to Remember, “Paranoia”
Andy Black, “We Don’t Have to Dance”
Pierce the Veil, “Circles”
Machine Gun Kelly, “Alpha Omega”
Real Friends, “Mess”
Waterparks, “Stupid for You”

The Journeys Alternative Press Music Awards, Fueled by Monster Energy Drink is a couple of months away from happening and the people behind the annual music awards have just unveiled the first wave of performers. On Monday (April 17), Alternative Press unveiled that bands like All Time Low, New Years Day, Sleeping with Sirens, Pierce the Veil, and The Pretty Reckless, and more are just some of the artists heading to Ohio in mid-July.

In addition to the above mentioned acts, rap icon Bone Thugs (the extension of Bone Thugs N Harmony), Andrew McMahon in the Wilderness, Against Me!, Machine Gun Kelly, and metal icons Korn will also grace the stage during the show.

“We’re really excited to perform at this year’s awards and are looking forward to seeing all our fans in Cleveland,” Korn frontman Jonathan Davis said in a statement. “I performed at the first ever APMAs back in 2014 with Asking Alexandria, and it’s been awesome to watch how this show has grown over the years.”

Tickets for the rock music-centric awards show are currently on sale at Alternative Press‘ website. In addition to general tickets which will set you back $40, several VIP packages are available including the Monster VIP Table, the Ultimate VIP, and Premium Seating packages.

The fourth annual Alternative Press Music Awards is set to take place on July 17 at the Quicken Loans Arena in the publication’s hometown of Cleveland. Unlike the past two years, this year’s awards show will be hosted by Black Veil Bride/Andy Black head honcho, Andy Biersack.

After much waiting, the nominees for the “2016 Journeys Alternative Press Music Awards” have been unleashed. On Thursday (March 17), the music publication took to their Instagram page to release the names of the nominees for the third annual event. Instead of unveiling all the potential winners at once, the magazine decided to release the names in half-an-hour increments, much to the excitement, and frustration, of fans.

The complete list of categories and the nominees, can be seen below.

Song Of The Year (Presented By Epitaph Records):
Falling in Reverse – “Just Like You”
Never Shout Never – “Hey! We Ok”
Of Mice & Men – “Would You Still Be There”
Panic! at The Disco – “Hallelujah”
Pierce the Veil – “The Divine Zero”
State Champs – “Secrets”

Philanthropic Band of the Year:
Jake Luhrs – Heartsupport
Andrew McMahon – Dear Jack Foundation
The Used – Living the Dream
You Me at Six – Passport to the Bars
The Ghost Inside – Fundraiser, PETA
The Wonder Years – Puppies Behind Bars, After School All-Stars, the Herren Project, Futures Without Violence
This Wildlife – National Breast Cancer Foundation

Most Dedicated Fan Base:
The Ghost Inside
New Years Day
Issues
PVRIS
The Maine
Mayday Parade

Album of the Year:
That’s the Spirit – Bring Me Horizon
Future Hearts – All Time Low
Blurryface – Twenty One Pilots
Copacetic – Knuckle Puck
American Candy – The Maine
Madness – Sleeping With  Sirens
Around the World and Back – State Champs
Found in Faraway Places – August Burns Red
The Pale Emperor – Marilyn Manson
Life’s Not Out to Get You – Neck Deep

“The 2016 Alternative Press Music Awards” will take place on July 18 at the Value City Arena at the Jerome Schottenstein Center in Columbus, OH. Voting for the nominees will begin on today at 6 p.m. EST on the awards’ official page on Alternative Press‘ website. 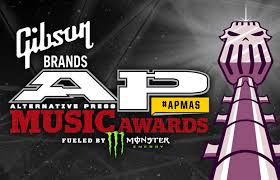 After so much publicity and posts from artists that we admire and listen to on a daily basis, the second annual Alternative Press Music Awards have called it a day (or night).

Leading the pack with the most wins at this year’s award show were the guys from All Time Low, taking home the awards for “Best Bassist” (Zack Merrick), “Best Drummer” (Rian Dawson), and “Most Dedicated Fans” (Hustlers).

In addition to the typical best whatever categories, legendary punk band X was given the Icon award while Corey Taylor from Slipknot presented Rob Zombie with the Vanguard award,

Artist Of The Year – Issues

Best Underground Band – Being As An Ocean

As soon as they become available, we will upload all the live performance videos from the show which included Panic! at the Disco, Weezer, Pierce the Veil, the return of Sum 41, and even Metro Station getting booed off the stage.

We’ve already given you the winners from last night’s inaugural Alternative Press Music awards, and like we promised we have gone ahead and looked for all the performances that took place and will be putting them up below.

Instead of talking about each of the bands performing, we will let the music speak for itself.

“Luck Be A Lady” and “Fly Me To The Moon” (Frank Sinatra covers)// Brendon Urie (Panic! at the Disco) feat. the Contemporary Youth Orchestra:

“City Of Ocala” and “Right Back At It Again”// A Day to Remember feat. Neck Deep’s Ben Barlow:

“A Love Like War”// All Time Low feat. Vic Fuentes of Pierce the Veil:

“If You Can’t Hang”// Sleeping with Sirens:

“There Goes the Neighborhood” and “Talk Shit=Get Shot”// Ice T and Body Count:

“Guns for Hands”// twenty one pilots: