If you ever need a pair of security guards to protect your business, it may not be a good idea to hire Simple Creatures’ Mark Hoppus and Alex Gaskarth. On Thursday (April 25), the duo unleashed the music video for their latest single “Adrenaline” which finds them being the worst security guards around.

The almost-three-and-half-minute video begins with the twosome sitting inside what looks like a locker room. By the look on both guys’ faces, they aren’t exactly excited to be at work inside of a morgue, but who would be?

As the music begins to play, the dead bodies in the morgue begin to mouth along to the lyrics. While Hoppus and Gaskarth are goofing off in their office —not once looking at their CCTV system— the dead bodies come to life. Two of the corpse, who look like they were in a relationship before dying, go frolicking in the graveyard while the others start dancing in the morgue. The video concludes with neither Hoppus nor Gaskarth aware of what’s going on.

Like we said, if you need a pair of security guards, it may be wise to look in another direction. Watch the music video for “Adrenaline” above.

While promoting the new album recently, the duo revealed that they already had plans to release its follow-up. The band allegedly unveiled the upcoming EP’s during a show, but there was no proof to corroborate these claims. Shortly after, the group confirmed that their second EP would be titled Everything Opposite and is due out later this summer.

Remember earlier this month when All Time Low frontman Alex Gaskarth announced that the band would be taking a break later this year? Remember when he said he would be interested in working with the other musicians especially when it came to songwriting? Well, it looks like his at-the-time-rumored plans were just hints about his latest announcement.

On Thursday (Jan. 24) Gaskarth and Blink-182 frontman Mark Hoppus announced the formation of their new act, Simple Creatures. Taking to social media the duo made the official announcement to their unsuspecting fans.

“You might be wondering what in the hell is going on with my socials right now. Well, my good friend Mark Hoppus and I have been quietly making music together for a little while now and we’re finally ready to share it with ya,” Gaskarth posted on Instagram.

He continues: “We’re calling this baby Simple Creatures and we’d like to invite you to join us for the ride.”

“So stoked to finally share Simple Creatures with the world! Alex and I have been working on this new band for a while.”

In addition to the formal introduction, Hoppus and Gaskarth also debuted the band’s first single, “Drug.” Following in true Blink-182 and All Time Low fashion, the song is nothing less than pop-punk goodness.

“‘Drug’ is always the first song we play people when introducing them to Simple Creatures, so it only makes sense that it’s the first single,” explain Hoppus.

“I love the ratty guitar lead mixed with the thumping kick drum. Lyrically, the song is about being destroyed by the things you love.”

The song was written with friend and producer Zakk Cervini whose resume includes All Time Low, Blink-182, 5 Seconds of Summer, and Yungblud.

Listen to “Drug” above.

Simple Creatures’ first EP is due out sometime in March. Pre-orders are available on the band’s website.

As for All Time Low, it looks like the band does not have any immediate plans in the future except for an appearance at this year’s United Kingdom-based music festival Slam Dunk Festival.

As for Blink-182, things have been quiet following the conclusion of their Las Vegas residency. Last week, EDM poster boys the Chainsmokers revealed they had gone into the studio with the band for “an amazing song.” 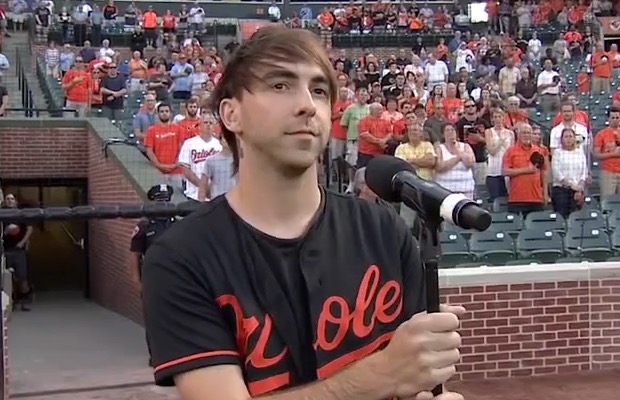 What could be more nerve-wracking than performing at a sold out show in your hometown?

How about performing the National Anthem in front of a packed stadium, on national television, and in front of your hometown baseball team?

Yeah, talk about scary encounters of a different kind.

Yesterday (May 27), All Time Low frontman Alex Gaskarth was given the opportunity to sing the National Anthem before the Baltimore Orioles took on the Houston Astros at Baltimore’s Oriole Park at Camden Yards.

Sadly, the Orioles lost the game with a final score of four to five, but that’s no reason not to enjoy Gaskarth’s take on the song.

Watch the video below and wait until the end where you will see him flash a goofy smile. Be proud, dude, you’ve finally made it.

Just a few night before the once in a lifetime opportunity, All Time Low had wrapped up their “Future Hearts Tour” at the Pier Six Pavilion in Baltimore. But don’t expect them to be taking a break from it all so soon. On Friday (May 29), they will begin all over again at the Eagles Ballroom in Milwaukee before heading across the pond for some European tour dates including their appearance at Reading and Leeds at the end of August. 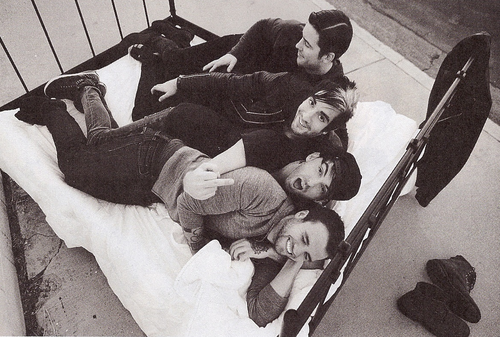 It appears the someone on Tumblr might have gotten a snippet of “Something’s Gotta Give” a couple of hours before the actual song is scheduled to be released.

Check out the snippet here and tell us what you think of the supposed new song.

All Time Low already confirmed that their album will be set for a March released date and now, the band have unveiled the name of not only the album, but the first single from it.

According to BBC Radio One, the band’s new album will be titled Future Hearts while the first single will be a track titled, “Something’s Gotta Give.” Aside from the that, the station has also unveiled what appears to be the cover art for the forthcoming record. 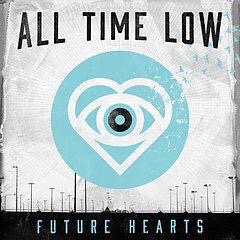 Frontman Alex Gaskarth and drummer Rian Dawson have also confirmed the name of the lead single in a series of tweets yesterday and that they will be present at the radio station when the new song officially drops tomorrow.

Check out the tweets and the album art posted by BBC Radio One here.

Home in LA for about 24 hours before flying to Lundun town with Sir @AlexAllTimeLow. Hoping for a Ravens win to keep me happy on that flight

Listen to @R1Breakfast from 6:30am on Monday UK fans! @AlexAllTimeLow & @riandawson will be on air w/ @grimmers premiering the new single!

In other news, a video of Gaskarth dressed like french fries doing promotions for a fast food place called Slappy Joe’s has surfaced. Watch and laugh as he complains about feeling like he’s back in “fucking college.”

We’re not quite sure what that means, but Urban Dictionary apparently had a definition for it. 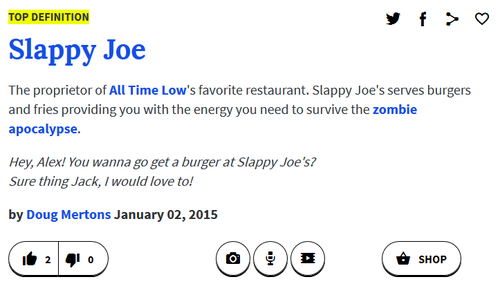 Yeah, we’re still not sure what’s going on either. 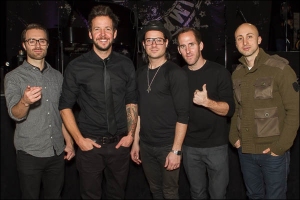 It’s like our pop-punk hearts swelled up as we read that Mark Hoppus of blink-182 , Alex Gaskarth of All Time Low, and Pierre Bouvier of Simple Plan would be working on some music together. the news came from Alter the Press and at the time just looked like a rumor with a high chance of actually being true. All three of the musicians have worked with each other before.

When the article had been published, Hoppus took to Twitter to let the publication know that they were on the right track with the news, but that the three of them weren’t just writing a song.

Instead, the tweet let the world know that Simple Plan were the ones recording a new album and that he and Gaskarth would be recording WITH the “Just a Kid” band, not just with Bouvier.

Ah, one of the threesomes our teenaged-selves fantasized about.

In the event we couldn’t take Hoppus’ word serious, because you know he is kind of joker, Bouvier took to Instagram to announced the news with a picture of himself. The caption on the social media site relayed a similar message as Hoppus’ that Simple Plan would be recording with the blink-182 bassist and All Time low frontman.

Earlier this year, it was confirmed that the band would be heading back into the studio and that 3OH!3 would somehow be involved. Sean Foreman, one half of the Colorado act posted the information on his Instagram. Drummer Chuck Comeau confirmed the news as well as that the new record should be released during the second half of 2015.

Now, all we can do is sit back and wonder what this track is going to sound like, considering everyone that has been attached to this record are a bunch of clown and jokers. 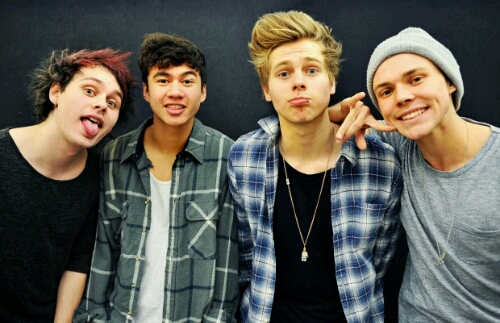 5 Seconds of Summer are one of the newest up and coming acts and some are even saying that they might be able to help resurrect the once “hopping” pop-punk scene and we can see why considering they began their career with recording covers from some of our beloved pop-punks acts of the 2000’s.

As if that wasn’t some kind of proof (aside from their catchy radio hit, “She Looks So Perfect” and the other tracks on their EP), the Australian quartet have recorded a track that was co-penned by one of the court jesters of “the scene,” All Time Low’s Alex Gaskarth.

The song is titled “Kiss Me Kiss Me” and will be featured on the group’s upcoming, debut full-length which is set to be released on July 22 through Capitol Records. Kind of makes us wonder about Gaskarth’s obsession with kissing (see We Are the In Crowd’s “Kiss Me Again).

Say what you will about them, some of your beloved pop-punk bands went through the same obstacles.