If you thought your list of summertime concerts was already jam-packed with a slew of tours, Young the Giant and Fitz and the Tantrums have just added another one to that list. On Tuesday (Feb. 19), the two acts formally announced plans to embark on a massive summertime excursion after a few days of teasing.

The co-headlining trek will find the two bands performing at venues across North America throughout June, July, and August. The 34-stop jaunt will include shows in Cincinnati, New York, Boston, Houston, Atlanta, Miami, Charlotte, Seattle, San Diego, and more.

The forthcoming excursion begins on June 12 at the Red Rocks Amphitheatre in Morrison, Colorado and concludes two months later on Aug. 16 at the Downtown Las Vegas Events Center in Las Vegas.

“We’re looking forward to returning to some of these iconic venues and bringing our show outdoors again this summer,” says Young the Giant frontman Sameer Gadhia in a press statement.

He continues: “Our single ‘Superposition’ is about two forces becoming one. It’s a song with a message that’s defied odds and garnered an overwhelming reaction. It’s perfectly fitting, then, that our co-headline concept this summer is about combining two properties. We are excited to see you out there!”

Fitz and the Tantrum frontman Michael “Fitz” Fitzpatrick adds: “We couldn’t be more excited to take over the summer with our friends Young the Giant on this co-headline tour! This is going to be a big year for Fitz and the Tantrums. We’ve got a lot of exciting news to come that we can’t wait to share with our fans.”

The upcoming summer tour will be in support of both bands’ new set of tunes.

Young the Giant released their latest studio album Mirror Master in October. Earlier this week, the record’s lead single “Superposition” reached the number one spot on the alternative radio chart.

The full list of upcoming tour dates can be found below. 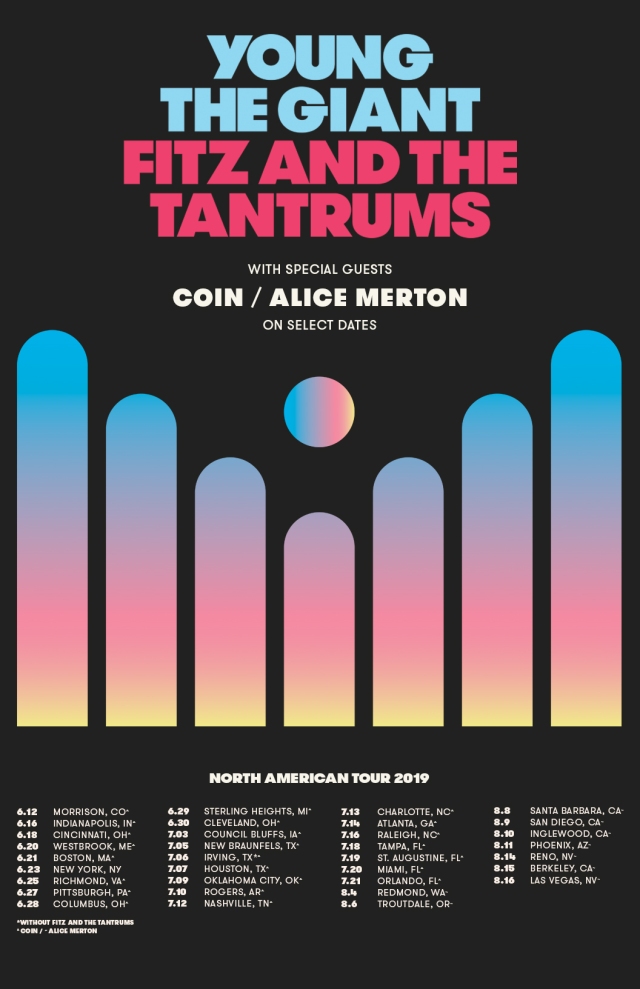