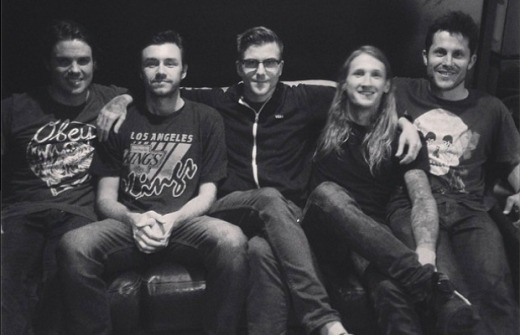 When Saosin announced in early February that they would be releasing a new album some time this year, we didn’t expect it to be so soon. On Wednesday (March 16), the California-based band announced that they will be releasing their highly anticipated third album on May 20. The new record will be titled Along the Shadow is the group’s first set of new songs in over six years. The new album also marks the group’s first record to be released through Epitaph Records which they signed to back in February.

While the CD and digital version of the new album will be available in May, those who want to buy the record on vinyl will have to wait a little longer. The vinyl version of Along the Shadow is set to be released on June 17. Pre-orders for the album (CD, digital, or vinyl) are currently available on the band’s website.

In addition to the new album title and official release date, the band is currently streaming the first single off of the record; a track titled “The Silver String.” The four-minute long clips can be streamed below.

With the band being formed in 2003, it’s hard to believe that Along the Shadow is the band’s first full-length album to feature original vocalist, Anthony Green. During his time in the band, Saosin only released one EP; Translating the Name. After his departure, the band enlisted Cove Reber and Green went on to form Circa Survive.

When Green left the group in 2004, there seemed to be a lot of issues that prompted his departure. But now it looks like all the old wounds have healed because we have a full-length record on the way, a full tour currently in progress, and a special appearance on the recently resurrected Taste of Chaos tour.

Along the Shadow is the follow-up to 2009’s In Search of Solid Ground.