Now that their new record is out, We Came as Romans has announced that they will be hitting the road in support of their recently released self-titled record. The fall tour will be a co-headlining journey with All That Remains who released their new album, The Order of Things, earlier this year.

Emmure will be the two groups’ supporting act for the complete tour while Red Sun Rising and Failure Anthem will perform on selected dates. The tour is set to kick off on Oct. 14 at The Intersection in Grand Rapids, MI and wrap up on Nov. 7 at The Palladium in Worcester, MA.

Tickets will go on sale beginning tomorrow, Aug. 28, at 10:00 a.m., local time. The full list of tour dates, as well as the official poster, can be seen below.

WE CAME AS ROMANS/ALL THAT REMAINS CO-HEADLINING FALL TOUR DATES: 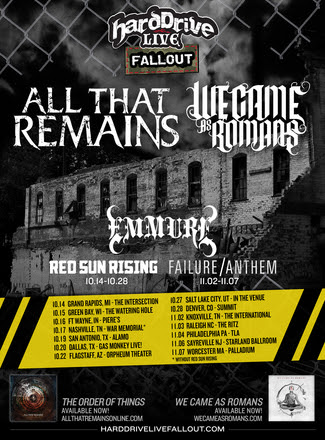 We Came as Roman’s self-titled record was released last month through Equal Vision Records. The fall tour announcement comes a month or so after the Michigan-based band wrapped up their summer on the 2015 Vans Warped Tour.