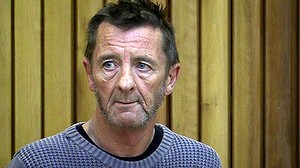 It looks like the other members of AC/DC have found out about Rudd’s arrest at the same time the press did. They have now released a short statement about Rudd which can be read below:

“We’ve only become aware of Phil’s arrest as the news was breaking. We have no further comment. Phil’s absence will not affect the release of our new album, Rock of Bust and upcoming tour next year.”

The rock gods have spoken.

AC/DC might be down another member following the news that drummer Phil Rudd has been arrest, but now is free on bail.

Police arrested the sticksman in Tauranga, NZ Thursday morning (Nov. 6) local time, on charges of attempting to “procure” the murders of two people. The alleged hiring of the hitman reportedly took place in late September, according to details released in court.

After being arrested at his home, which was later searched, Rudd has been released on bail after entering a no plea; his next court appearance will be on Nov. 27.

Rudd was ordered by Judge Louis Bidois to have no contact with the man he allegedly tried to hire to carry out the hit. The judge has also decided that it would be in the best interest of everyone else, if he would keep the identity of the victims under lock and key as well as the identity of the person who was hired to perform the hit.

Considering the way the press operates, it won’t be long until those identities as well as the motive behind the murder for hire becomes known.

The procure charge is not the only one the 60-year-old drummer is being charged with. While searching his home, officers discovered methamphetamine and cannabis resulting in the possession charges for both he now faces as well.

Rudd’s arrest and inevitable trial follows the news that founding member, Malcolm Young has left the band due to health concerns following a stroke earlier in the year. Young was officially removed from the line-up about two months ago to be replaced by his nephew Stephen.

AC/DC are set to release their new studio album, Rock or Bust, on Dec. 5 and to reportedly head out on a world tour in 2015. With Rudd’s arrest, there’s not telling what this might mean for that tour.