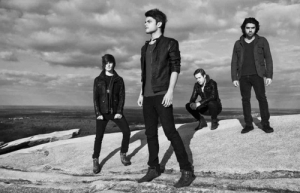 About two weeks ago, There for Tomorrow announced plans to release a new album at the end of the month. Instead of it being a full-fledged studio album, the band decided to go ahead and record an EP of only six tracks, two which had previously been released.

Now, with less than 12 hours until the digital EP is officially released, the band are giving fans the chance to listen to the record in full. Instead of sticking to the pop-punk sound we’ve been accustom to, their sound seems to have matured since the days of A Little Faster, though we do still listen to that album on repeat all the time.

Check out Nightscape below.

When asked about the direction of the album by the Huffington Post, who kind of began streaming the new record on their site first, vocalist and guitarist Maika Maile said, “We had been touring off ‘The Verge’ for about a year and a half and we just felt like we were stuck in this cycle: you make a record, then you tour on it for two years, and then do it again four times in a row.”

“We kind of hit a wall creatively, and just to be dead honest, the moral was down. We were stuck in this box that we always wanted to transcend, all the boundaries and pigeonholes that we had set for ourselves and that others had set for us. We just needed a break.”