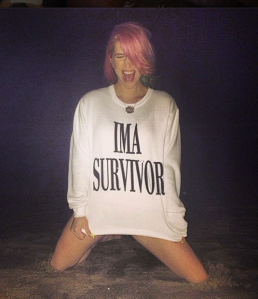 It’s going down and it looks like Dr. Luke will be the one yelling timber.

Months after leaving a rehabilitation center for an eating disorder, Kesha (real name Kesha Rose Sebert) has filed a lawsuit against longtime producer, Dr. Luke (real name Lukasz Gottwald) and according to recently filed documents, it appears that there was no harmony between the two.

The Rising Star judge is claiming that over the course of ten years, the super-producer was abusive to her, physically, mentally and emotionally.

In the lawsuit documents, obtained by TMZ, Kesha alleges that Dr. Luke began abusing her after signing to his record label, Kemosabe, when she was 18 years old. From there, she says that she was forced to use drugs and alcohol while experiencing several sexual advances from him.

In the documents, Kesha chronicles several times that she has been abuse by Dr. Luke was also asking the judge to let her out of her contract with him.

Several examples of abuse includes one time in which the singer says she was “made to snort something” before getting on a plane. Later on, Dr. Luke forced himself on her. There was an other instance reported that the producer slipped her some “sober pills” and when she woke, she was in his bed with no recollection of how she got there.

“This lawsuit is a wholehearted effort by Kesha to regain control of her music career and her personal freedom after suffering for 10 years as a victim of mental manipulation, emotional abuse and an instance of sexual assault at the hands of Dr. Luke,” Kesha’s lawyer, Mark Geragos, told TMZ.

“The facts presented in our lawsuit paint a picture of a man who is controlling and willing to commit horrible acts of abuse in an attempt to intimidate an impressionable, talented, young female artist into submission for his personal gain. Kesha is focused on moving her life and her career beyond this terrible time.”

During the pop star’s stint in rehab, it was revealed that part of the reason she had checked herself in had to do with Dr. Luke and all the insults about her looks and her weight. In one instance, Kesha says the producer called her a “fucking refrigerator” and urged her to lose a lot of weight while during some tour downtime.

At the time, Dr. Luke had said that the claims were “completely false.”

This isn’t the first time some problems had been brewing between the two. Last October, fans of the “Warrior” has started a petition for her to be let out of her contract saying that the producer was forcing her to sing “recycled” crap.