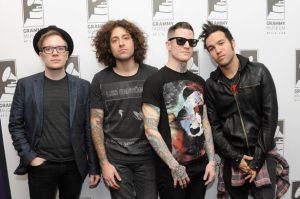 What happens when you take a song from a certain pop-punk band and give it a twist with some piano and a cello? A cover that might just send a massive chill down your spine of how good it is.

Typically when fans cover songs, they tend to stick closely with the way the original musician recorded the track. Brooklyn Duo which like their name are a duo and only use the piano and cello to cover song. No singing.

So if you can imagine what Fall Out Boy’s newest track, “Centuries” would sound like with only a cello and a piano, that’s probably only a portion of how good the real thing is.

Check out the video below and the rest of their stuff if you have the time. (It’s Friday, so of course you do.)

As for Fall Out Boy, recently it was revealed that a new song of theirs will appear in Disney’s new movie, Big Hero 6. The song, “Immortals” was featured slightly towards the end of the new trailer for the film which premiered exclusively yesterday during the New York Comic Con.

As for the new album, we’re waiting for the official title, which is believed to be Centuries, and the official release date.