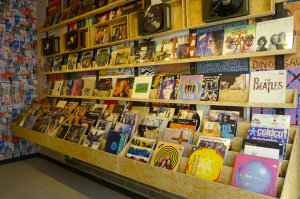 Sorry Urban Outfitters, it looks like your secret is out, you aren’t the king of vinyl sales after all.

Not happy or convinced about that claim, Billboard decided to do their own snooping into the claim and of course, they found out that Hollinger had exaggerated his claim that Urban Outfitters were the top seller of vinyl.

The music mag took it upon themselves to survey music labels, their distributors, and wholesalers which according to them makes up about 80% of the United States music market.

The result revealed that Amazon is actually the number one seller of vinyls, not Urban Outfitters like we were all led to believe. In the statement from last week, Hollinger had said that their sales even trumped Amazon; guess that was not true.

According to the survey, Amazon comes in with a total of 12.3% of the market vinyl sales market while Urban Outfitters actually comes in at number two with 8.1% of the vinyl market. Rounding out the list of the top five sellers of vinyls are Hastings Entertainment with 2.8%, Hot Topic with 2.4%, and Trans World Entertainment with 2.2%.

Label sales and distribution executives pointed out that Amazon has a further reach internationally than Urban Outfitters who only have about 50 outside of the U.S. as opposed to the 300 plus they have stateside.

Apparently, the people behind Urban Outfitters knew this backlash was going to happen because according to Billboard’s report, they haven’t been able to get in touch with any of the executives at the company and were told by the operators, they do not speak with the pres.

Ouch. Well, no one likes to be seen with egg on their face.