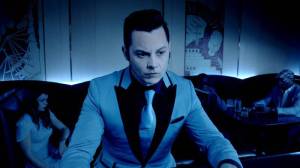 In case you have been asleep most of the day, you probably have heard about Jack White and his Boston rant last night against Rolling Stone. The former White Stripes frontman stopped himself and deemed the rant to be “Kanye West-esque.”

The rant, like you probably read took jabs at Rolling Stone and how they sold their musical soul to the paparazzi devil by posting such riveting article like “What Taylor Swift Wore” and even took a jab at the Foo Fighters and the fact that they have three guitarists.

Instead of getting into a word debate with White, the Foo Fighters took to their Twitter and posted a playful response to the word vomit with the caption, “Busted…behold, the secret of the Foo Fighters sound….”

Instead of letting this spin out of control and become a tabloid making headline (like it hadn’t already), both White and Foo Fighters’ frontman Dave Grohl have responded to the audio in a joint statement, well kind of; both White and Grohl actually have the same publicist.

What a way to keep it in the family.

Read the statement below and hear the audio after that.

“Dear dream-makers of the media….

Last night Jack White made a joke on stage!

There was a minor equipment mishap, specifically with his guitar, and in an effort to keep his audience engaged, he made a joke! It was meant to be funny and self deprecating: “hey sorry, you’re stuck with just me up here…” vs the Foo Fighters who have three guitar players on stage and regularly play stadium shows.

Jack has the upmost respect for the Foo Fighters and communicated with Grohl this morning.

So if you’ll let us, we’ll all continue with our day and we assure you: All is well in the rock n roll world.”

Do you think White was just being sarcastic or was it a case of narcissist douchebaggery? You be the judge of that and for the record, White was in Boston (like we said earlier), not Cleveland. When you listen to the audio, you’ll understand.