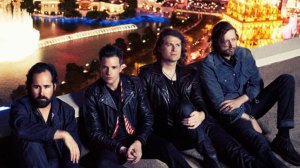 Brandon Flowers is in the middle of recording his second solo album, the follow-up to 2010’s Flamingo which will be released sometime in 2015.

The Killers’ frontman revealed to NME the news that he has headed back into the studio to do a little recording of his own, solo material. Joining him in the studio as producer on the upcoming record is Ariel Rechtshaid who has previously worked with sister group HAIM and Vampire Weekend.

In the interview, he reveals that the album will have a different sound than Flamingo, his hit debut record, which mostly had a Las Vegas sound to it, paying homage to the band’s hometown. But it’s not like Flowers, is completely getting away from the Vegas sound; he does admit that there will be a little bit of that influence in it.

“People are going to interpret it how they will, but there’s only a little bit of Vegas in there.”

Flowers was also asked about Rechtshaid and how he works in the studio to which he revealed there have been several head-butting moments.

“He’s taking me out of my comfort zone. Normally, I make demos and they’re pretty similar to how the song ends up, but he’ll take a song and be like, ‘I hear this.’ It’s incredible. His palette and his range, what he’s able to say. At first, we were butting our heads together, but now, we’re hitting it off.”

If you’re a Killers fan and think that this means Flowers might be saying good-bye to the band like rumors said back when he announced a solo project, then you would be wrong. Flowers says he has no plans on quitting the band or leaving them behind.

“I wanna keep being in this band. I don’t think we’ll get too morbid about it, I think we wanna keep going.”