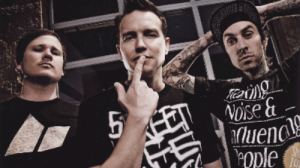 Blink-182 frontman Tom DeLonge just revealed that the band will be doing something special when they take the stage this upcoming weekend at the annual Reading and Leeds Festival.

“We’re going to play some songs off our last EP, songs that we haven’t played in Europe,” DeLonge said in a recent interview with NME.

“That came out at the end of 20112, so we’ll do that and then we’ll play a lot of the classics, but we’ll have something special that we haven’t played for a long time that we’ve brought back and people are going to love that.”
What it is, we would like to know.

But, if you’re expecting to see some new music from that “in the works” album the band announced last month, then sadly we will have to bust your bubble or at least DeLonge did.

“We don’t play stuff that’s not released. We’d rather a nice version of the song be the first that’s out, a good-sounding version. And we can’t premiere a new song now because it’ll be filmed on camera phones and then all over YouTube and suddenly that’s the version that everyone knows. We want them to hear the version that we spent time on.”

Blink will be in good company this year at Reading and Leeds. Paramore, Queens of the Stone Age, The Arctic Monkeys and more are set to headline the weekend long festival due to begin on Friday, August 22 and end Sunday, August 24. This also marks the second time in their career that the band have performed at the fame United Kingdom festival.