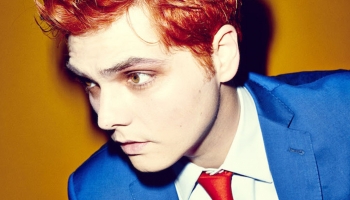 After officially making his solo debut at Warner Bros. a few weeks back and confirming that he will be playing a warm-up gig before Reading and Leeds this weekend, former My Chemical Romance frontman Gerard Way has unveiled the music video for his song “No Shows.”

The former frontman premiered the new song on BBC Radio last night, and now has brought the new single home for fans here in the US. The song will be featured on Way’s upcoming, solo debut, Hesitant Alien which is slated to released on September 30.

Check out the video below and take a trip to an 80s television show, if any of you were born at the time and could remember that. The video does come less than a week after Way released a teaser about Pink Zero Station, which as we can see in the music video is the galactic television show Way and his band appear on. As for the song, it sounds like something that would have appeared on the My Chemical Romance Conventional Weapons “album.”

If you happen to be going to Reading and Leeds this weekend, do us a favor and get some video of Way’s performance because we’re really intrigued by that.