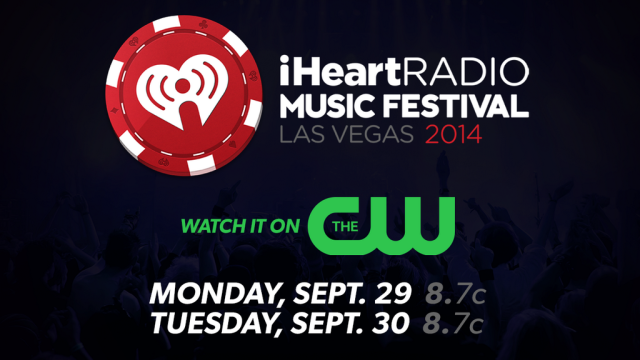 iHeartRadio have revealed some of the artists who will be taking the stage during this year’s iHeartRadio Music Festival in September.

The festival, which will be celebrating its fourth year, announced the first batch of artists which include many of those that are constantly on a loop on majority of the iHeartRadio stations. Ariana Grande, Steve Aoki, Iggy Azalea, Calvin Harris, Lorde, Nicki Minaj, One Direction, Paramore, Ed Sheeran, Taylor Swift, Usher, Eric Church, Train and the Zac Brown Band, Coldplay, Bastille have been confirmed to perform already with many more to be announced in the near future.

Though the posters for the two night event claim that “The Legend Returns,” we still don’t understand that since most of these artists have performed on at least one of the “music” awards that have already happened this year.

One thing we can say might be legendary is the fact that they somehow managed to get Mötley Crüe on the line-up for the event. Mötley Crüe announced earlier this year that they will be officially calling it a day at the end of their upcoming tour, so for them to be playing a festival like iHeartRadio is a pretty big departure from the hair metal fans that usually flock to their shows.

Who else is wondering how One Direction/Ariana Grande fans will feel about the infamous band?

Anyways, the iHeartRadio Festival is set to take place on September 19th and 20th at the MGM Grand in Las Vegas. The show will be broadcast a week or so after the actual event on The CW, so keep and eye out for that in case you can’t make it to Vegas.