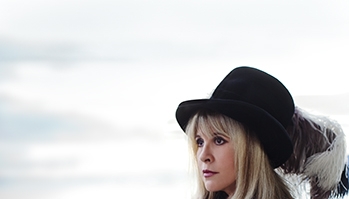 The Voice is known for bringing in well-known artists to come in and mentor the contestants before they hit the stage to sing for the world on behalf of their mentors.

In the past we have had Green Day frontman, Billie Joe Armstrong, Coldplay frontman, Chris Martin, Jennifer Hudson, and several more.
In the last few months, it was revealed that Ed Sheeran and Cher would be making a guest-appearances on the show as mentors to the contestants this upcoming season.

Today, another iconic singer has been added to the list; Stevie Nicks.

The Fleetwood Mac frontwoman was confirmed for a guest-appearance which coincidentally comes on the heels of Fleetwood Mac announcing that they will be hitting the touring circuit later this year (September 30 in Minneapolis to be exact).

Nicks will be acting as an “adviser” to Team Adam Levine during NBC’s hit show’s seventh season. Nicks has reportedly been working with Levine and his 12 team members as they assign songs and rehearse with the contestants as they prepare for the battle rounds.

This upcoming season also brings in a breath of fresh air as two new judges take their place on the spinning, red chair. Gwen Stefani and Pharrell Williams will be taking the place of Shakira and Usher/ Christina Aguilera and Cee Lo Green.

The Voice is slated to return to its scheduled time on September 22. the network also revealed that they would be revealing more “advisers” for the upcoming season soon.