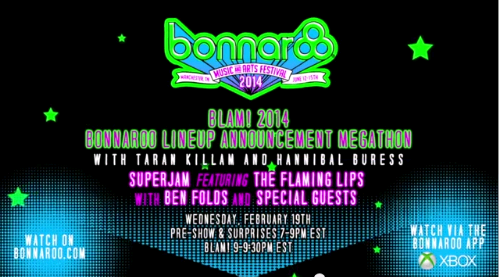 Today, the people behind Bonnaroo have unveiled the full schedule for the festival that is slated to take place this June in Manchester, TN. Kanye West, Elton John, Skrillex, Jack White, and Frank Ocean have been revealed as headliners for this year’s edition of the yearly festival as well as Vampire Weekend, Mastodon, Phoenix and many more.

For those of you who are wondering whatever happened to that feud between West and the people behind the festival, it turns out that his popularity might have led to their decision to put the “squid brain” comment to rest.

Organizers also revealed that Flaming Lips frontman, Wayne Coyne got to choose two unknown bands to not only perform at the large music event, but they will also get paid to do so. Can you say fairy godfather?

Sadly, like with many music festivals, there are some overlapping acts which means you will need to plan your schedule according to get the best out of all the acts taking the stage. Or, you can be like those people who stay glued to one stage the entire day waiting for just one artist; we don’t judge here.

Check out the full schedule here and don’t forget, Bonnaroo takes place at the Great Stage Park in Manchester during the weekend of June 12 to June 15.