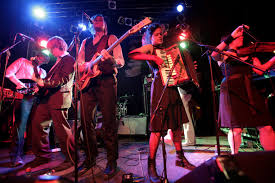 The Arcade Fire might be headlining a lot of festivals this year and sold out shows, but it looks like a comment from frontman Win Butler made at Coachella last week has officially turned into some serious beef.

After making a comment about giving a round of applause to bands who actually play instruments at the famous festival, Deadmau5, of all people, took offense to that and went on a heated rampage on Twitter taking down anyone in his way.

A week after that, the band have finally responded in their own way; during a show. The band released their statement in the form of an LED square, helmet thing at St. Louis’ Chaifetz Arena. Butler appeared on stage with it during their song “Normal Person” which showed an image on Deadmau5 on it.

We expect another Twitter rant from the DJ/producer any minute now.