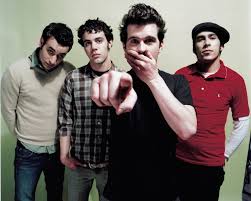 Brand New have been taking some cues from Bruce Springsteen and have begun to cover some tracks during their sets on their current tour.

During their show in London last week, the band played “The Boy Who Blocked His Own Shot” from Deja Entendu when they decided to do something a little different by including covers of Coldplay’s “Yellow” and Modest Mouse’s “Trailer Trash.”

Like London, the band did the same things at their show last night (April 18) in Manchester, but rather than including it as a live mix to one of their own songs, they went on to cover Nine Inch Nails’ “Wish” on its own. Watch the fan shot video below and tell us if there’s a song in your opinion that the band should cover in the future.

Brand New are currently on tour in Europe, scheduled to perform in Germany, England, and Italy followed by a touring stint in North America for selected stops in the United States and Canada.