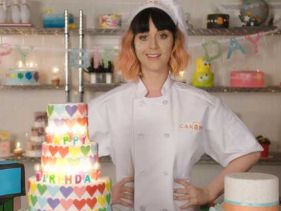 Katy Perry had revealed last week that her next single from her album, Prism would be “Birthday.”

The original post from last week’s “Throw Back Thursday” theme on Twitter showed a picture of a really young Perry in front of a birthday cake with a blurred out little girl next to her which turned out to be her older sister, Angela. The picture had a photoshopped “Happy Birthday” banner on it which led her KatyKats to conclude that her next single would be that track.

A week after the announcement, the lyric video for the track has been unveiled and it looks like Perry is reverting to her old Candyfornia Dreams persona. The video features her playing pastry chef, making delicious cakes inscribed with the lyrics from the song. Even a Hello Kitty cake makes an appearance.