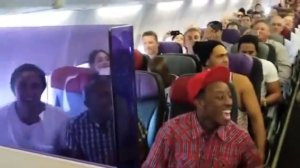 What happens when you get the complete cast of the Australian production of The Lion King on the same flight? A video that has already reached 4.4 million views in a 24-hour time frame.

The full cast of the stage production of the hit Disney film were in route to Sydney and decided upon treating other plane guest to an impromptu performance of “The Circle of Life.”

On the official Disney on Broadway YouTube page under the description, it reads the following:

“After an amazing day at THE LION KING Brisbane season launch announcement, members of our Australian cast felt so elated they decided to sing the ‘Circle of Life’ prior to take off on their flight back to Sydney!

So sit back and enjoy the amazing flash mob.”

Talk about fun in the friendly skies and thanks to the flight attendant who recorded it all for us to see. Check out the company below give the in air audience a little taste of their show.