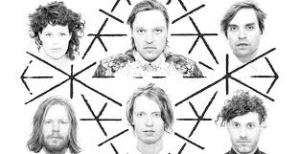 The Arcade Fire are definitely taking a page from Bruce Springsteen’s covers book. Just like The Boss, the band have been gracing fans at their recent shows with covers, but unlike Springsteen, the Montreal-based band have stuck with having city-specific tracks for each stop.

Until this point, they have covered Prince’s “Controversy” in Minneapolis, Stevie Wonder’s “Uptight” (Everything’s Alright) in Auburn Hill, Mich., Constantines’ “Young Lions” in Toronto and Devo’s “Uncontrollable Urge” in Cleveland.

According to their tour schedule, tonight is the last night of their “Reflektor” Tour before taking a quick break for some festivals. Tonight’s stop is on Bridgeport, CT, so what song do you think they will cover in honor of the city?