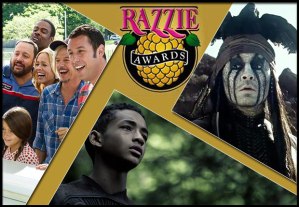 With the 86th Annual Academy Awards being tonight, the 34th Annual Razzie Awards were held last night in a ceremony at IgnitedSpaces in Hollywood honoring the worst of the worst in films. Leading the pack with the most nominations was Adam Sandler’s Grown-Ups 2 which surprisingly won nothing during the award show. But sadly, Will Smith and his blockbuster film, After Earth as well as Movie 43 were not so lucky; they went home with the most Golden Raspberries.

Funny enough though, The Lone Ranger was nominated (and won) a Razzie last night, but is also nominated for an Oscar for “Best Make-Up.”

Check out the full list of Golden Raspberry Winners below.