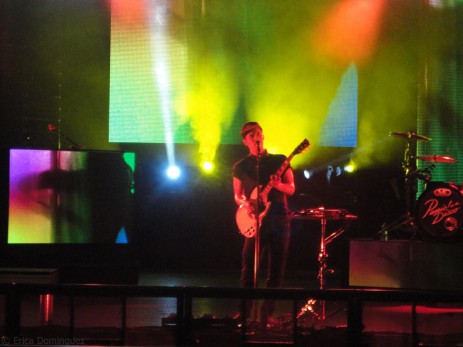 Making it to the tenth year anniversary of your debut album is quite a feat for many bands and for Panic! at the Disco it hasn’t been such a quiet journey. With several band members leaving the act including original lyricist and guitarist, Ryan Ross, all seemed doom for the Las Vegas band, but almost five years after all that happened, they are back and even more loved than before.

Any preconceived notions that the band was a one-hit wonder went out the window the second you pulled up to the historic Fillmore at the Jackie Gleason in Miami Beach. A line began at the front of the venue and circled around it, clear towards a parking garage a block or so away. Even the fast pass lane had its own traffic jam of people eager to make their way in. Once the sold out crowd made up of mostly kids in their early teens, made their way into the venue, it was as if the floodgates had opened from a dam. Pushing and shoving began in no time from those who arrived late and hoped to get close enough to witness frontman Brendon Urie in all his glory.

The show began with New York City-based Junior Prom who opened with several of their songs including lead single, “Sheila” from their EP. The duo spoke about being grateful to be out of the frozen weather of New York and in Summery sunshine of South Florida, for a change. With music that would be fitting on an All Time Low and Boys Like Girls tour, they were an instant hit with the catchy tunes.

Following a quick set change, the other opening act, The Colourist took the stage. With songs reminiscent of what poppy indie music should sound like, you would expect to hear their tracks on the local college’s radio station. The California band which is made up of five members, were introduced individually by girl drummer, Maya Tuttle (PS, guitarist Justin like pizza). They also announced that their self-titled debut album would be coming out soon and to keep an eye out for it. With a few more songs, a slower one that didn’t seem to fit and a more upbeat one, their set came to a close, giving way to the long pause before Panic! at the Disco would take the stage.

For what felt like ages of pushing and shoving from audience members getting relentless, the lights finally dimmed and the countdown began.

It was show time.

Frontman Brendon Urie appeared on stage in full black (black leather pants anyone?) minus his jacket which looked to be of gold sequins while the rest of the band was dressed in all black. The countdown blended into the first song of the night, “Vegas Lights” from their recently released album, Too Weird to Live, Too Rare to Die.

Instead of sticking to all songs from the newly released album, the set list did a great job of including fan favorites from all their previous albums. From their debut, A Fever You Can’t Sweat Out “The Only Difference Between Martyrdom and Suicide Is Press Coverage,” “Time to Dance,” “Camisado,” “But It’s Better If You Do” and “Lying Is the Most Fun a Girl Can Have Without Taking Her Clothes Off” made the list.

As for their second album, Pretty.Odd, not much love was given except for “Nine in the Afternoon” with its clock-centric visuals.

Vice and Virtues which can arguably be the least liked album had several songs make the cut including lead single, “The Ballad of Mona Lisa,” “Hurricane,” “Let’s Kill Tonight,” and Universal Studios’ current theme song, “Ready to Go.” But while the set list was a blend of new and old tracks, many songs from Too Weird to Live were present including “This is Gospel,” “Nicotine,” “Casual Affair,” and first single “Miss Jackson” where Urie got on the drum platform and did a backflip onto the stage.

You could not deny that Urie has showmanship running through his veins because he easily transitioned from playing the drums, to playing the guitar to playing the piano on stage throughout the set.

Without any warning, the stage lights turned a shade of indigo and the band left the stage, without a single sign on what was to come.

Whispers began among the audience which eventually led to most of them chanting, “Panic! Panic!” coaxing the band to come back on stage for their encore.

Like clockwork, the band returned onto the stage for their encore with a shirtless Urie carrying a microphone stand wrapped in bras. Like with any shows with a half-dressed singer, the audience began to push and shove as well as hooting and hollering.

The encore was two songs long beginning with “Girls/Girls/Boy,” the same song in which the video features a “naked” Urie. Before beginning on the last song of the evening, Urie gave the audience a taste of his YouTube compilation, “Positive Hardcore Thursday”; a nudge at what would have happened if Panic! would have gone in the screamo direction. Like most screamo acts, the words that were being screamed were unintelligible.

Closing out the show was the song that made them a name in the music world and took them from being Fall Out Boy, Pete Wentz’s pet project to performing at the MTV Video Music Awards, “I Write Sins, Not Tragedies.” With how loud the crowd was singing along, you could barely make out the real voice of the song. Midway through the song, Urie once again did a backflip, not missing a beat from the song. With a simple wave of the hand and throwing of some drumsticks and guitar picks, the house light came up putting an end to another great show.

When all was said and done, the insane crowd shuffled out as fast as they arrived, leaving a sea of empty, overpriced water bottles and glow sticks on the ground for the staff to clean up.

Just another night at a rock show.

**Noticeably missing from the line up was drummer Spencer Smith. The drummer had decided not to take part in the current tour after revealing that he was suffering from addiction last year.**