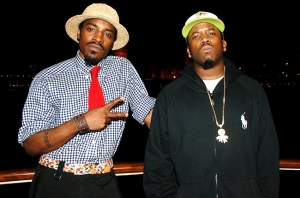 Outkast might have taken a break for a longtime, but now it looks like the duo are coming back with a fiery passion.

Yep, we almost couldn’t believe that when we first read it, but alas, it’s true.

“It’s truly an honor to celebrate 20 years and still be free to do music the way we choose,” said Big Boi. “Don’t just think outside the box, know that there is no box. I’m looking forward to rocking the stage with my Bro Ski and to all the fans — stank you smelly much, this is for y’all!”

“And imagine, all we wanted to do was rap. I am thankful to have been a part of a group that allowed me to explore anything that came to mind and have fun doing it. Returning to the stage together is the most exciting way for us to thank everyone for their 20 years of supporting Outkast,” Andre 3000 added.

They’re show at Coachella in April will mark the 20th anniversary of their debut album Southernplayalisticadillacmuzik. As for those “over 40” festivals, Coachella is the only one that has been confirmed at the moment, but we’re sure those events will be announced soon.

Even though Big Boi and Andre 3000 took a break from their group doesn’t mean that they shafted the music world during their time off. Big Boi went on to release two solo albums while Andre 3000 did launch a clothing line as well as worked on Beyonce’s contribution to The Great Gatsby Soundtrack (that cover of Amy Winehouse’s “Back to Black) and will star as Jimi Hendrix in the upcoming bio-pic.