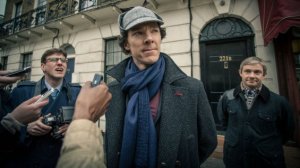 It’s almost Christmas time and you know what that means? The BBC have our hearts in their hands.

With the return of Doctor Who for its yearly Christmas special of doom where we say good-bye to our floppy-haired, fez and bow tie wearing Doctor, Matt Smith to the return of Downton Abbey, but there’s one franchise that fans have been waiting eagerly for; the return of Sherlock.

“Baker Street isn’t there anymore. It’s been two years, he’s moved on with his life” Sherlock’s older brother, Mycroft tells his brother when he appears from “the dead.”

“The one person he didn’t think matter the most to me is the one person that mattered the most,” is possibly one of the biggest hints as to who helped him with such a big feat. Our bet is on dear, little Molly Hooper.

While the show isn’t scheduled to return until New Year’s Day in the U.K., fans on the other side of the ocean have to wait until Jan. 19 to find out just how he faked his own death.

Anyways, check out the trailer before and start getting that eared hat and magnifying glass ready.