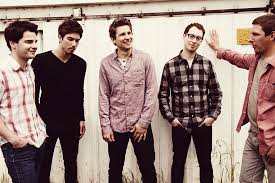 The Early November have finally answered the question that many of their fans have been wondering about especially after revealing some cryptic tweet yesterday about their album, The Room’s Too Cold . The band went on to announced that not only will Rise Records be repressing the album, but that they will be performing the full album for the first time ever on December 21 at a show in Philadelphia.

They also announced that tickets and the LP’s pre-sales will begin on Friday, September 20th.

Check out the message the band released on their website earlier today concerning the repressing.

To celebrate the album and the holidays, the band will perform the record in its entirety for the first time ever. The evening will also include an additional set of songs from the bands entire catalog as well as special guest yet to be announced. This special performance will take place on December 21st 2013 at Union Transfer in Philadelphia, PA.

On Twitter, the band also let fans know that they had been “cordially invited” to the tenth anniversary/holiday show later in the year. This past summer, the band had been on the Vans Warped Tour with frontman Ace Enders playing double duty in the band and performing his solo stuff.