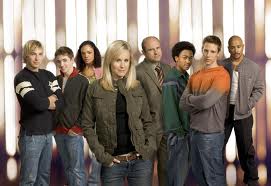 After raising the $2 million to make the Veronica Mars movie, the cast and crew revealed yesterday during their Comic-Con panel, the three-minute trailer for the highly anticipated follow-up for the “gone too soon” pop culture television show.

At Comic-Con, thousands of fans slept ont he street in order to secure them a spot inside of the ballroom where creator, Rob Thomas and the cast which included Kristen Bell, Jason Dohring, Percy Daggs III, Francis Capra, Enrico Colantoni and more, answered questions about the movie as well as giving fans the official first trailer.

Instead of boring you with what the trailer is about, we will tell you just to fast forward to the three-minute mark for the movie footage or watch the whole thing which includes the cast and crew talking about the show and how Kickstarter helped the dream become a reality.

So what do you think fellow Marshmallows, are we ready?!