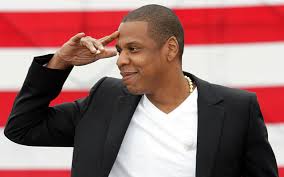 With a little over a week before the release of his new EP, Magna Carta Holy Grail, Jay-Z initiated a scavenger hunt like event for his fans with the reward being the entire track list for the upcoming album.

Last week during the NBA Finals, Jay-Z teamed up with Samsung to release a three-minute commercials. At first, the thought was that it had something to do with a documentary about the rapper, but at the end it was revealed that he would be releasing a brand new album just in time for the fourth of July.

Billboard was reporting that Jay-Z’s publicist, Jana Fleishman, started the scavenger hunt by tweeting a series of photos and clues yesterday. Fans who were able to guess the location would find her waiting with books which contained the song titles. But for those hoping for more than just the song titled, that’s where the scavenger hunt ended because the only thing revealed were the song titled and of course how many tracks.  The full track list can be seen below.

Samusung users who download Jay-Z’s app will be able to get the album for free on July 4th while the rest of the public will get the album 72 hours later.