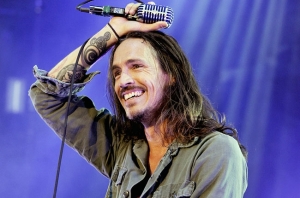 Incubus frontman, Brandon Boyd will be releasing a new album with the help of producer Brendan O’Brien.

While this might seem to be coming from left field, this  isn’t the first time that Boyd has done something musical without the involvement of his band. In 2010, he released a solo album called, The Wild Trapeze and now Rolling Stone is reporting that his new project is named, Sons of the Sea. In his interview with the music magazine, Boyd has described his new project as “oddball pop” which should be interesting coming from him.

During the interview, Boyd also said the following about the new music:

“This is a piece about the moment when you understand that as good or as bad as something seems, it’s exactly where you are supposed to be,” says Boyd. “If perceived as such, one can have access to a limitless inspiration, a ‘place’ of sorts that is the wellspring of creativity! Cheesy? Maybe. But fun? Hell yes.”

As if his new music wasn’t enough, the singer will be doing a live performance that will stream on Incubus manager, Steve Rennie’s website on June 28th; the link can be found here.

The EP for Sons of the Sea titled Compass, will become available on June 25 through Avow Records.