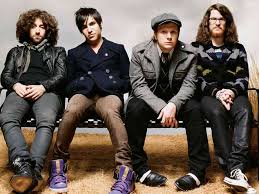 Last month, Fall Out Boy frontman, Patrick Stump addressed something that he had on his chest concerning the “hate” culture in the pop culture world. Now, bassist Pete Wentz is following suit with writing up several blog responses to some issues that have been boiling with in the fan base.

Some of the issues include pitting certain band members against each other, meet and greet opportunities that might not happen in the upcoming tour and the instant negative reviews the band got when they released the album art work for their upcoming album, Save Rock and Roll.

You can read some of his responses right here:

2. I’ve had a few people in my timeline bugging out about me not sticking around after shows. last year i got a threat during a post show hang. i don’t feel comfortable or safe sticking around areas that aren’t secure because of that. if you happen to run into me for sure come over and say hey- i do not bite, much. until i feel a bit better about that stuff I’m gonna stick to m&g’s and what not.

3. the album cover: I’ve always felt a particular draw to this part of the world. during WW2 my grandpa was shot down over burma and lived in a prison camp there. my grandma joined the OSS (the precursor to the modern CIA) and set out to thailand to search for him. since he returned to his family and i have been constantly interested in the area. i had a friend enter and document huge butterflies along the river and the discontent of the people and monks at their treatment by the junta. we held our breaths and watched as thousands of red cloths resisted.i love this photograph.it is so simple but says so much.it screams to me of a brothers separated by worlds- but connected forever as brothers.

i sometimes thing there isn’t a stronger yet more complicated bond than brothers. i love this photo. it is peace in a violent world. it is change in the face of an everlasting constant. but at the end of the day it is art. it is supposed to challenge you. we do not simply make things that we think are molded to be consumed by our fans- that is not what dictates what we create.  it is our art- i hope that you wait until you here the accompanying album to judge how you feel about it- but at the end of the day its art and you aren’t supposed to just like it. we aren’t a reality television show, were a band.”